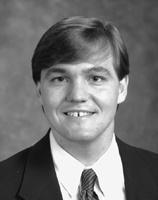 Portland City Commissioner Erik Sten and Portland Business Alliance President Sandra McDonough will discuss "Voter-Owned Elections: What Worked, What Didn't and What Do We Really Want?" at the Portland City Club Friday Forum on June 23.

Portland's new voter-owned election system made its debut during the May primary. With this "dress rehearsal" now behind us, how did Portland's taxpayer-funded "clean money" election process perform? Has the new system kept a lid on campaign spending? Has it drawn more diverse candidates?

Supporters say the system worked: Overall spending went down and the city handled initial problems appropriately, such as candidate Emilie Boyles' mishandling of funds and the city's subsequent request for their return. They say the system will provide greater opportunity for citizens to be involved in public life by leveling the campaign playing field.

But critics are pressing the City Council to refer the measure to voters as early as this November, four years earlier than originally scheduled — claiming, among other concerns, that the system favors incumbents and that loopholes regarding "independent expenditure" campaign committees can be unfair to candidates who are privately funded.

More importantly, they argue, is this an appropriate expenditure of city funds at a time when the city is struggling to provide basic city services and support our schools?

And there are operational issues in play, too. When collecting signatures to qualify for public financing, should the system require that signers be adults? U.S. citizens? Registered voters? Residents of Portland? How should the required $5 contribution be documented? Is the system too difficult for inexperienced candidates to navigate?

Coffee/tea table tickets are $5; and general seating is free for City Club members, $5 for nonmembers. Both will be available at the door on a first-come, first-served basis.

City Club of Portland is a nonprofit, nonpartisan civic affairs organization that promotes civic engagement and active citizenship to build a stronger community. For more information, visit www.pdxcityclub.org or call 503-228-7231.