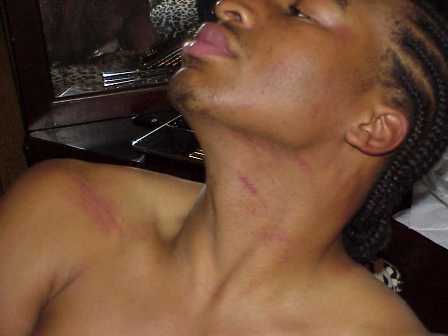 Daniel Collins, photographed by The Skanner News' Jerry Foster hours after his release from the hospital

A 21-year-old Portland native – home for the holidays from an Arizona college where he's an A student in sports medicine – says he was Tasered three times Dec. 24, rendered unconscious by Portland police, and revived after paramedics rushed him to Oregon Health and Sciences University.

Daniel Collins, the grandson of Pastor Mary Overstreet Smith, maintains that he was an innocent bystander trying to exit the Barracuda Club when four police officers took him and several friends to the ground, beat him and later cited him at the hospital for resisting arrest and interfering with an arrest.

Portland police did not return requests for comment before presstime.

A young man who before this had no arrest record, Collins must now appear in court before he is due back at the Glendale Community College for classes on Jan. 11.

Founder of the Powerhouse Church of God in Christ and past winner of the "Woman of the Year" award from the Oregon Commission for Women for her charity work in North Portland and for Hurricane Katrina evacuees, Pastor Smith's voice still shakes when she describes what happened late on Christmas Eve.

"All I could think about was—here we go again," she told The Skanner News. "Exactly four years from the time they Tased my great-grandson."

Smith founded the Sir J Millage Drop-In Center for Change, a day center for autistic youth, after her disabled great-grandson was Tasered repeatedly by Portland police officers in December of 2006 because he would not respond to their commands.

In that incident, a severely autistic 15-year-old, Sir Millage, had wandered away from home in the middle of the night and was wandering into traffic on the Broadway Bridge without a shirt on.

Officers tried to stop the nearly 6-foot tall, 250-pound teen, but he was too disabled to speak or understand their commands. Saying they feared he would attack them, Officers Andrew Griggs and Michael Chapman Tased Millage and beat him with a baton.

While police accounts say the teen was Tasered half a dozen times, the family says emergency room records showed more than a dozen Taser rounds were used.

Pastor Smith had maintained a special medical alert with the Portland police that included a description of Sir Millage and his disabilities, just to guard against such an outcome; she brought a $3 million lawsuit against the city and the officers in 2007.

Now she says the family is horrified by what happened to Collins – who is very close to Millage because they've grown up together and are the same age.

"Actually they thought he was dead because when I picked him up he still had his EKG things on him," Pastor Smith said. "I'm really glad it wasn't a fatality like they thought it was."

Smith, who says she is retaining an attorney to look into the citations, and Collins maintain there was a disturbance at the club but Collins was completely uninvolved.

"I just think it was like totally unnecessary," he says.

"Somebody called and said they saw somebody lying on a stretcher that looked like him, but it took me about two hours to find out exactly where he was," Pastor Smith said. "I got up there and he came out, he was all beaten and bruised up, and he sat down in the car, and he said 'Grandma, I wasn't in a fight.'

"He said, 'The police did all this, and now I know how Sir felt,'" Pastor Smith said.

"He said, 'Grandma, when that Taser first hit my neck, I felt like I was going to be electrocuted -- like they were going to kill me," she said.

"This is uncalled for. He's a student, he's never even had a traffic ticket, he's just a really good boy."