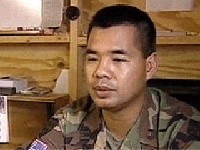 OLYMPIA—Former Army Capt. James Yee, a Muslim chaplain who served at the Guantánamo detention camp and now lives in Olympia, says the three suicides there last weekend are a military and intelligence failure.

The military failed in its mission to protect the lives of the detainees, Yee said Monday in a telephone interview with The Associated Press.

Yee's service at Guantánamo ended when he was arrested in September 2003 and accused of spying. He spent 76 days in solitary confinement before he eventually was cleared, after the government's case unraveled and all criminal charges were dismissed in March 2004. He received an honorable discharge in 2005 and now lives in Olympia.

Yee, a West Point graduate who converted to Islam in 1991, previously served at Fort Lewis.

He said that when he served at the prison camp on Cuba, suicide watch was a priority for guards, who constantly walked through the cellblocks.

"They should have visual contact every two or three minutes. That was being done when I was down there because suicides were a serious issue back then," he said.

But Yee said a successful suicide at Guantanamo was almost inevitable.

"When I was there in 2002-2003, the situation was already dire," he said. "Here we are now well into the fifth year of detention. It was only a matter of time."

Yee said he wrote the standard operating procedure for Islamic burial rites at Guantánamo because of the expected death in 2003 of one inmate who attempted suicide. The man was in a coma for months but recovered with brain damage, Yee said.

The procedure called for burying the body in a concrete cover because it was expected the body eventually would be exhumed and returned to the prisoner's home country.

"If the prisoner is buried on Guantánamo there's a specific way, in accordance with Islamic law — the face toward Mecca, put into the ground on the deceased's right side, things like that."

Yee said he didn't recognize the names of the two Saudis and one Yemeni who were found in their cells on Saturday, hanging from sheets and clothing. He expects he would recognize their pictures if he saw them.

The Defense Department on Sunday identified the three as Mani Shaman Turki al-Habardi Al-Utaybi, Yassar Talal Al-Zahrani and Ali Abdullah Ahmed of Yemen. Officials said all three left suicide notes, the contents of which have not been made public.