"The most affectionate creature in the world is a wet dog." Ambrose Bierce 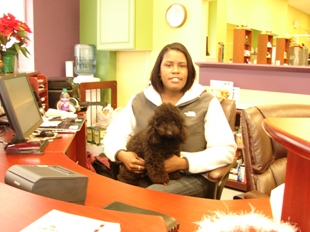 In Japan, where hot tubs are as traditional as eating sushi, it's not rare for dog owners to avoid getting drenched by putting their pooches through a dog washing machine. The idea is that you put your pet inside and out it pops 40 minutes later smelling like a newly laundered rug.
Here in Portland, Pets on Broadway tried installing a pet washing machine a few years ago. They tested it first of course. A former manager at the store went through the machine himself before giving it his seal of approval. Did he wear leather pants and an Afghan coat, I hear you wondering. Or just his scuba gear. Whatever it was, that machine's gone now. And in unrelated news so is that manager.
"We're really quite sensitive to our animals and most dogs don't like it," says Kate Hockavay who works at the store now. "When the dog doesn't want to get in, well what can you do. It was kind of scary looking."
Let's not get started on what cats think about this feline torture …oops I mean pet washing …device. Meeowrr!!!
Pets on Broadway simply doesn't have the space to wash dogs and cats on site, Hockavay said. So you can get all kinds of supplies there – just don't ask for a doggie blow dry.  What's a pet owner to do?

"If you don't know what soap tastes like, you've never washed a dog." Franklin P. Jones. 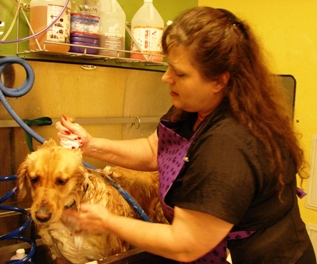 You adore your pet, but you'd prefer not to shower together. So it's time to visit the professionals. Cheri Myers, for example,  has been washing, brushing and beautifying dogs since she was 9 years old. Myers got her start helping out in her parents grooming shop. Today she lives on a farm outside Portland, and keeps two German shepherds, a sheltie, a Pekinese, four cats, eight horses, a French lop bunny and a toad. But that's not enough for her, she says.
"There are so many breeds of dogs that I love to groom, and I can't own them all," she says. "So this way I can see them once a month, baby them, play with them, and know their parents will love them even more when they are clean."
You can find Myers in Corina Owens new pet salon and spa 'Show Dogs' at 926 N. Lombard Street. "I've owned dogs my whole life," Owens says, petting Bailey, one of her four poodles. "I just love dogs and that's why I wanted to open Show Dogs." 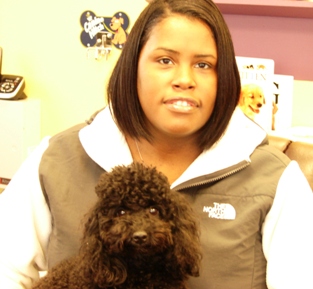 Owens hired Myers after trusting her to groom her own dogs for 10 years. She also employs Myers' daughter Trinity as her second groomer along with three pet bathers.
"You know, when Cesar Millan came to town, he went to Cheri to groom his dogs," Owens says. "I figure if she's good enough for the dog whisperer, she's good enough for the rest of us."
Owens opened Show Dogs in November, outfitting it as a luxury doggie spa where pet owners can find everything a dog or a cat needs to look and feel fantastic. In the spacious reception area, there are cozy coats and comfy beds that Paris Hilton's puppy would envy. Not to mention lotions and potions to meet every canine health and beauty need. "We have eye care, ear care: everything to keep your dog healthy and well groomed," Owens says.
Myers said she was happy that Owens had chosen her to lead 'Show Dogs' grooming team. "I feel we're a lot alike; we have the same values," she said. "We love the animals and care about their wellbeing. Money is nice, but it's not the deciding factor for Corina. If the dogs need something we're going to do it."

"If you get to thinking you're a person of some influence, try ordering somebody else's dog around." Will Rogers 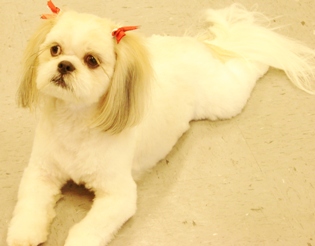 The Skanner News visited 'Show Dogs' to see a state-of-the-art doggie spa in action. Myers is grooming Lola, a long-haired golden retriever. After giving her a little trim on the grooming table, she coaxes her to step up into a stainless steel doggie bath. It's the first time Lola has been in this bath so she's not sure at first, but under Myers patient direction she climbs in.
The sprayer mixes soap with water so it's easy to massage through Lola's coat. During the holiday season, your shampoo scent choices include apple and sugar cookie. No word yet of roast turkey.
As she's washing Lola's face, Myers points out some deep scars on her muzzle.
"Lola has very sensitive skin and it used to get very irritated," she says. "But with regular washing and with making sure she is completely dry – that's important – her skin has really cleared up."
Show Dogs has a separate drying room where Myers uses an air blower to make sure her clients are properly dry. That's crucial, she tells us.
"I have clients who ask me why it only takes a couple of days for their dogs to have that doggie smell when they wash them themselves, but if we wash them they stay sweet smelling for the whole month," she says. "The difference is that we make sure they are dry from the skin out and don't get a buildup of layers of moist skin."
Most dogs apparently don't mind the dryer when they have someone like Cheri Myers petting them and talking to them. She keeps a calming hand on her clients most of the time and seems to have a sixth sense for what they are feeling.
"Lola likes getting her teeth brushed," she says. But how does she know? "Take a look and you can see she's just biting on this toothbrush," Myers says. "Mind you it's poultry-flavored toothpaste." 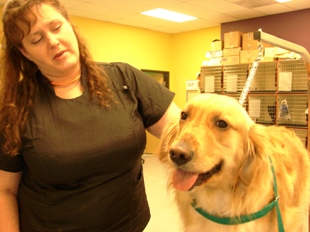 PHOTOS from top: Corina Owens with Bailey at Show Dogs; Cheri Myers washes Lola; Corina and Bailey; Maggie after being groomed; Lola before being washed and groomed.