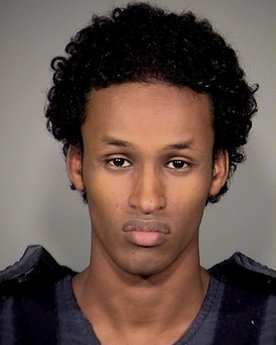 Mohamed Osman Mohamud hatched the plan on his own to use a cell phone to detonate what he believed was an explosive-filled van at a crowded Christmas tree lighting ceremony Friday, according to the official, who wasn't authorized to discuss the case publicly and spoke on a condition of anonymity. The Skanner News Video

The official said Mohamud was very committed to the plot and alone planned the details, including where to park the van for the maximum number of casualties. Authorities say Mohamud sent bomb components to undercover FBI agents who he believed were assembling the explosive device, but the agents supplied a fake that Mohamud tried to detonate twice via his phone.
The official said agents began investigating Mohamud after receiving a tip from someone who was concerned about the teenager. The official declined to provide any more detail about the relationship between Mohamud and that source.
The FBI monitored Mohamud's e-mail. They found that he was in e-mail contact with people overseas and was asking how he could travel to Pakistan and join the fight for jihad, according to an FBI affidavit.
Mohamud, a student at Oregon State University, e-mailed a friend living in Pakistan who had been a student in Oregon in 2007-2008, according to the official. The FBI's affidavit says the friend in Pakistan referred him to another associate, but gave him an invalid e-mail address that Mohamud tried repeatedly to use unsuccessfully. The official said FBI agents saw that as an opportunity and e-mailed Mohamud in response, claiming to be associates of his friend, the former student.
The friend Mohamud was e-mailing was in Pakistan's northwest frontier province, an area known to harbor terrorists, but the law enforcement official said there is no indication that any foreign terrorist group was behind the plot.
The FBI affidavit says the undercover agent first met Mohamud in person on July 30 and asked what he would do for the cause of jihad. The agent suggested that Mohamud might want to spread Islam to others, continue his studies to help the cause overseas, raise money, become "operational" or become a martyr. Mohamud immediately responded that he wanted to become "operational," but didn't know how and needed training, the affidavit said.
The affidavit says when Mohamud was asked what he meant by being "operational," he responded that he wanted to put together an explosion. The undercover agent said he could introduce him to an explosive expert and asked Mohamud to research potential targets.
At a second meeting on Aug. 19 at a Portland hotel, the agent brought a second undercover agent; Mohamud allegedly told them had selected the tree lighting at Portland's Pioneer Square for the bombing.