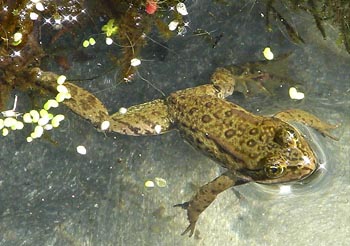 LITTLEROCK, Wash. (AP) -- James Goodall cradled a frog in his hand and stroked its belly, trying to soothe its racing heart before slipping it back into a cattle tub filled with water.

He smiled proudly as he watched the little black and green Oregon spotted frog dart away to join the other 28 that he and fellow inmate Harry Greer are responsible for fattening up before spring.

``We baby them like little kids,'' said Goodall, who is serving time at the prison near Littlerock for possession of drugs with the intent to deliver. ``They've got personalities, too, it seems like.''

Much to the surprise of research scientists and zookeepers also participating in a ``head start'' program to bolster the dwindling population of the frogs, Goodall, 45, and Greer, a 46-year-old convicted robber, have raised the biggest, healthiest amphibians.

``People may not think prisons are the right place for this type of environmental work, but it's the ideal place,'' said Chad Lewis, spokesman for the state Department of Corrections.

``We have folks with plenty of time in a controlled environment. That's what you need.''

The Oregon spotted frog was listed as an endangered species in Washington in 1997 and currently awaits the same status on the federal list.

``When they begin to disappear, it's a sign that something is wrong with the environment,'' said Dave Ellis, deputy director at Northwest Trek near Eatonville. ``It's a warning to us and by helping species like the spotted frog recover, we're helping save the environment that is key to keeping the bigger environment we live in.''

The program to boost the 2-ounce frogs dwindling population was spearheaded in 2008 by the state Department of Fish and Wildlife.

Eggs are gathered each winter and distributed to Cedar Creek, Northwest Trek, the Oregon Zoo in Portland and Woodland Park Zoo in Seattle. The amphibians then are coddled and cared for over a nine-month span before being released in the wetlands at Joint Base Lewis-McChord.

``It gives them a head start so once they're put back into the wild, they have a better chance of surviving, reproducing and protecting themselves,'' Ellis said.

After years of raising the frogs, their keepers have learned little tricks to help the endangered amphibians survive and strengthen.

They now know to monitor the water constantly, to reduce the number of tadpoles kept in each tank and to be on the lookout for aggressive frogs that might snap up all the food before their meek brethren get a bite.

At Cedar Creek, Greer, who has been looking after the frogs since April, said around-the-clock care enabled their success. The frogs he and Goodall raised are larger (57 grams) and have a higher survival rate (83 percent) than those from the other participating agencies.

``It's a big operation,'' said Marko Anderson, a classification counselor at Cedar Creek who supervises the project and obtained a $5,000 grant to help pay for equipment and assistance from interns at The Evergreen State College.

``It's become the heart of Cedar Creek,'' he said.

The trial-and-error methods at the prison and three zoos seems to have paid off. The number of frogs released this year more than doubled to 1,346, the survivor rate skyrocketed to about 85 percent and participants said the frogs looked healthier.

When the eggs are distributed to the institutions, they are hardly bigger than the tip of a pencil.

At Woodland Park Zoo, about 200 are grouped together in a plastic container with a few inches of water. The Rubbermaid bin floats in a 300-gallon tank so caretakers can control the water's temperature and keep track of the tiny eggs.

Deciding to experiment this year, Northwest Trek's keepers used mesh nets instead of plastic containers and kept their tadpole numbers to under 100 per tank.

``Any project of this nature is a learning process,'' said Keith Neitman, primary frog keeper at Woodland Park Zoo. ``It gets better every year.''

Once the eggs hatch and grow to about an inch long, the tadpoles are given free reign of the tank and fed a labor-intensive meal.

A mixture of kale and romaine lettuce is boiled down and put in a food processor to be ground into a pesto-like consistency. It then is frozen into cubes so it can be easily doled out for several days.

Eventually, the frogs abandon their herbivore lifestyle and become carnivorous. That's where crickets lots and lots of crickets come in.

``We want to raise big, strong frogs as quickly as possible,'' said Dave Meadows, an animal keeper at Northwest Trek.

Once the frogs are 2 inches long, they're ready to face the wild.

In late September, a group of people dedicated to helping the spotted frogs flourish gathered at Dailman Lake on JBLM and let loose 1,346 frogs into the water.

About half were inserted with a tiny transmitter tag the size of a rice grain. If a frog is nearby when biologists scan the area with wands, the scanner will show a 12-digit number with information on that specific frog.

Sure, they have to be within 18 inches or so of a frog to register them, but it's a way for Fish and Wildlife to keep tabs on the spotted frogs and assess how many are surviving and whether they're breeding.

This year's frogs are expected to help researchers gather the most conclusive data yet on how successful the head start program has been.

In 2008, Fish and Wildlife workers tried walking around the marsh and counting how many frogs they saw. Unfortunately, the results were skewed because frogs hid in the muck or the water.

Last year participants switched to radio transmitters, which were helpful but could only be attached to a small number of spotted frogs.

``We had to do a different system,'' said Marc Hayes, a senior research scientist for Fish and Wildlife.

The PIT tags which stands for Passive Inductive Transponder will be useful for the volunteers who go out weekly to conduct surveys on the frogs.

``Now we have a lot more frogs that are trackable,'' Hayes said.