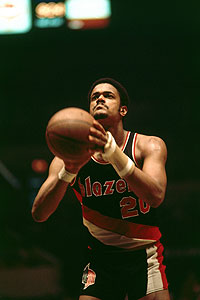 Lucas died Sunday at his home in Portland, the team said.

At public appearances, fans often greeted Lucas with cries of "Luuuuuuke!" His competitive demeanor on the court was in contrast to his gentle nature off it.

He served as an assistant coach with the Blazers for six seasons, but last year he left the team to undergo surgery before suffering a setback last November. He did not return to coaching this season.

The former Marquette player averaged 14.4 points and 8.8 rebounds in 12 NBA seasons with Portland, New Jersey, New York, Phoenix, the Los Angeles Lakers and Seattle. In two seasons in the ABA with St. Louis and Kentucky, he averaged 15.2 points and 10.8 rebounds.

He was a five-time All-Star.

Lucas led Marquette to the 1974 NCAA title game against North Carolina State and was selected to the All-Final Four team along with future Portland teammate Bill Walton. The 6-foot-9 former Pittsburgh high school star averaged 15.8 points and 10.6 rebounds as a junior that season.

Marquette also retired his No. 20 and inducted him into its Hall of Fame, and Walton named his son Luke, a player for the Lakers, after him.