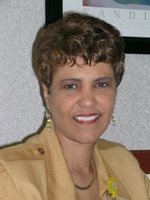 Jackie Gaines has thousands of stories to tell. As the first woman to lead the annual fund-raising campaign for United Way of the Columbia-Willamette, Gaines is eager to tell all of her stories to those who want to help their neighbors.

Her stories go back 20 years, when she lived in Baltimore, Md., and worked as the president and CEO of a United Way-funded agency. They continued when she became a United Way volunteer, then a board member.

After Gaines moved to Portland six years ago to become administrator of Providence Milwaukie Hospital, she soon became involved with the Portland-based United Way of the Columbia-Willamette, which serves Multnomah, Washington, Clackamas and Clark counties.

Soon, she had even more stories. As co-chair of United Way's regional health campaign, as a board member, vice-chair of the campaign cabinet and now campaign chair, Gaines is well aware of the area's needs.

Last year, the United Way campaign collected $17.6 million in donations to allocate to 50 agencies that deal with problems ranging from mental illness to gang involvement. Those agencies, in turn, distribute their funds to other agencies and organizations trying to meet local needs in four "impact" areas designated by United Way: successful kids, community wellness, helping hands and tools for living.

As she prepares for the United Way campaign this fall, Gaines said she is "on a quest" to gather as many volunteers as possible to create the "largest campaign committee in history."

"There are compelling stories to tell," she said.  "I need many story tellers, many people with the same compassion as I have out there. There really needs to be many, many voices."

While much of the fund-raising effort in the past was done by the business community, Gaines, an African American, hopes to expand the campaign to include voices representing different ethnicities, income levels, careers and ages. The intent is to have a cross-section of the community that understands the need to help those in trouble.

"Problems cut across all those cross-sections," Gaines said.

She said she likes the new direction United Way is headed: focusing attention on outcomes rather than problems. Instead of allocating funds to an agency dealing with an ongoing issue, United Way is encouraging community partnerships by giving three-year grants of $35,000 to $250,000 per year to agencies that collaborate with others to create strategies that address critical issues and cause long-term changes. Other one-year, nonrenewable grants are given to agencies committed to removing barriers to services and reaching more clients.

"We're holding the communities and the agencies accountable for making a difference in the future," Gaines said. "That's a new journey. It used to be that agencies didn't have to prove a result. Now United Way has a mechanism in place for hitting a target."

"United Way realizes it can't save the world, but it can focus on some areas," she added. "It's more than having a budget, it's having a vision."

Before moving to Portland, Gaines, 49, who was trained as a nurse and has a master's degree in primary health care from the University of Maryland School of Nursing, was vice president of Community Health Systems Integration at Bon Secours Baltimore Health System, where she directed an institute that provided mental health services. She also directed a community-based institute that focused on health education and prevention.

For 12 years, she was the president and CEO of Health Care for the Homeless Inc., which provided primary health care to over 50,000 homeless patients a year through four health centers in Maryland.

As the administrator at Providence Milwaukie, she manages the 77-bed hospital and the pharmacy, laboratory, diagnostic imaging center, respiratory services department and the Providence Center on Aging.

"My personal journey in my career, from the time I was seeing patients, has been to make a difference in the quality of life for people, particularly the poor and vulnerable," she said.

"United Way gives me a volunteer opportunity to expand that goal outside of my career. It's what I love, what I'm passionate about, what I've committed to in my lifelong journey."

Although the organization has been operating since 1920 in various forms — as the Community Chest, United Fund, United Good Neighbors and now United WayoftheColumbia- Willamette — Gaines said she is both proud and sad to be the first woman to lead the fund-raising campaign.

"It's a sad statement that it has taken this long," she said. "But I'm proud to open the door to other women.

"We are going to knock the socks off of this campaign," said Gaines, whose personal fund-raising goal is $20 million, although the board of directors has not established a campaign goal yet. "There's no fear; we can do it. We want to make this a memorable campaign so other women can follow with as much fury."

Brent Stewart, president and CEO of the United Way of the Columbia-Willamette, who has been with the local organization for only two years, said he didn't know why United Way waited so long to ask a woman to lead the campaign. "I have to assume the prior leadership worked hard to try to find someone like Jackie," he said. But, he added, she won't be the last woman to lead a campaign.

Stewart called Gaines a "remarkableleader, extremely articulate and focused like a laser."

"She has a personality like amagnet,"headded. "People want to be around her and talk to her. She's a beam of light."
Gaines' light will beam on those who are hurting. Her focus will be on motivating volunteers to see those same needs.
When asked to tell one of her stories, Gaines pauses for a moment. There are so many that come to mind, she said. Most of them come from the time she worked at Healthcareforthe Homeless, which received United Way support. At night, she would take her backpack, filled with medical supplies paid for with United Way donations, and minister to those living on Baltimore's streets.

One day while working in the clinic at Healthcare for the Homeless, Gaines received a call from a nearby business owner. He had heard moans coming from the back alley, and he thought they might be from a teen-age girl. He had called an ambulance, but he asked Gaines if she could check on the girl.

"I grabbed my backpack and ran down the street," Gaines said. "I found a 15-year-old homeless girl who was in labor. She was crowning already. The ambulance had not arrived.

"I'm in the back of an alley on a blanket, and this young girl is giving birth to a baby. It's not something you can stop. I'm holding her hand, and we're welcoming this baby girl into the world.

"The girl was a victim of abuse and had run away. She hadn't told anyone she was pregnant. For that brief moment in time, as she clung onto me, and I clung onto her helping her give birth, I was her only support.

"If the clinic had not been there, if it had not had the resources, what would have happened to this girl in that brief moment of time?"

Although Gaines doesn't see patients now, she said she knows United Way is still making funds available for similar experiences, helping make a difference in peoples' lives, one at a time.

"It doesn't take much for me to close my eyes," Gaines said, "and see the stories."