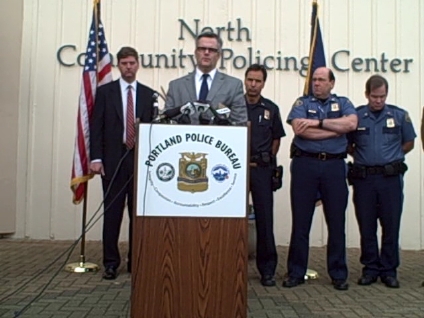 Months after announcing a quest to tighten up gun laws, Portland Mayor Sam Adams announced Friday that his first major target will be gang youth.

Anyone with gang connections found in illegal possession of a firearm will soon face "federalized" charges and heightened jail time if they are convicted – but a telephone hotline will be set up for anyone trying to get out of "gang life," he said Friday.

While the plan still faces City Council approval for funding, juvenile justice reform advocates were giving a thumbs down on the proposed harsher penalties.

"Unfortunately this is always the response of our elected leaders," wrote Albina Ministerial Alliance member Jo Ann Bowman, in a heated discussion on The Skanner News' Facebook page over the weekend.

"If the police could be trusted to only use these tactics with kids who are in gangs that would be one thing. But experience has shown us when cops are given this type of authority from the mayor then any black or brown kid looks like a gang member. We know with measure 11, 75% of kids plea guilty to something else out of fear of a mandatory sentence," Bowman wrote. "This is as far from justice as you could get."

"I think we know certainly that it's important to let youth know there are consequences for possessing guns," says Shannon Wight of the nonprofit Partnership for Safety and Justice. "We also know that some 16 percent of kids report having been in possession of a gun or firearm within the last 30 days.

"So if we're just trying to criminalize possession of a firearm, we're going to be putting a lot of kids in jail, and probably not creating greater safety in the neighborhoods where it's needed," she told the Skanner News this week.

"Let me be very, very clear as mayor: if it is not legal for you to have a gun, if you have a gun illegally, we intend to find you, and we intend to take that gun out of your hands," Adams said Friday. "We at the same time are going to offer you the opportunity to do that yourself, and that's why this is a two-part approach."

"We're going to open up the floodgates, if you will, with respect to federal prosecution of federal gun crime," said U.S. Attorney Dwight Holton. "If you have a remote affiliation or association with a gang, and you have a federal gun, that is a gun for which you can be prosecuted federally, then you will be prosecuted federally — you will face more time in the federal system than you will in the criminal system.

"The message to gang members should be clear: if you have a federal gun, or you are involved in violence, law enforcement is coming for you," Holton said.

Under federal firearm statutes if you have a car felony for example, or a restraining order for domestic violence or any number of things that trigger federal prohibitions on having a firearm, you go to jail, Holton said.

The Partnership for Safety and Justice this month released the preliminary report on how juveniles are affected by Measure 11 charges. The group collected anecdotal evidence, and also surveyed every juvenile facility in the state on their practices regarding kids charged with adult crimes.

The group also obtained records on almost every single youth charged with a Measure 11 crime since the law went into effect in the mid-1990s.

A "federalized" criminal charge may or may not be the same as any given specific Measure 11 charge – but both take the discretion to impose jail time away from local judges and set up enhanced, mandatory sentencing guidelines.

Both also raise the potential that youth will be held in adult facilities while awaiting trial.

Civil libertarians have railed against "federalizing" criminal offenses for years, because, they argue, enforcing criminal laws has traditionally been the territory of local jurisdictions.

Critics say that placing additional anti-gun laws in the hands of federal officials costs more, and can create confusion between legal jurisdictions – and putting more offenders in jail can in fact have a negative effect on community livability in the long run.

The major issues, according to the Partnership, are who is targeted for arrest, how youth are treated before a conviction is handed down, and what the outcome of the charges has been in most cases.

"I think we can look at the people being arrested, certainly younger people and people of color are certainly going to be targeted in those policies," Wight said. So far thousands of Oregon teens have been drawn into the system on Measure 11 charges.

While more youths of color have been arrested on Measure 11, the Partnership's research indicates most are never convicted on those charges – but rather it appears that they are more often over-charged, and then plead down to lesser sentences than White youth.

"I think what that tells us is that Measure 11 is not just being used to get the worst of the worst, which is how it was sold originally to Oregon voters," she said. "It's actually being used more as a tool in the courthouse than to really make sure that the so-called worst of the worst kids are getting long prison sentences."

Numerous studies across the country show kids who end up in adult facilities – not uncommon nationally when Measure 11 charges are filed or in the case of "federalized" offenses — are actually more likely to commit future crimes than youth who are kept in the juvenile justice system.

"Oregon has a unique thing, and it was ahead of its time when it happened back in 1995, where kids who get convicted of Measure 11 can — if they're engaging in treatment and behaving appropriately — do up until their 25th birthday in a state juvenile facility," Wight said.

However she says that policy is not followed across the entire state; in most Oregon counties, kids arrested on a Measure 11 charge are more often ending up in an adult jail. "And numerous studies have found that youth are at greater risk for physical and sexual assault when they are in adult jails, and often what jailers do to protect youth from those physical and sexual abuse threats, put them in isolation," Wight said

"So many kids are spending three, six, nine months, sometimes a year or longer in isolation cells in county jails for their own protection — and while they're in there of course they're not receiving education services, treatment services, the kinds of things that we know actually help kids succeed, and make our communities safer," she said.

She adds that there are "about seven" counties that don't put kids in adult jails, including Multnomah County, "most of the time, although there is always an exception for them where they can move a kid if they think isn't complying with their rules," she said.

"I think the most important thing is understanding that putting kids in the adult system and subjecting them to these long sentences, more often than not actually makes kids more likely to commit future crimes, than if we held them accountable within the juvenile justice system, and I don't think we new that when we passed Measure 11 back in 1994," she said. "Research is now showing us that this isn't good policy, it doesn't make us safer."

The Partnership for Safety and Justice, formerly called the Western Prisons Project, trains members to learn to write letters to the editor, have successful meetings with their legislators, and leads delegations to the state capitol in Salem on community lobbying days. For more information go to www.safetyandjustice.org, or call 503-335-8449.