Leaders Reach Out to Grant H.S. Teens After Payton Murder

By Brian Stimson of The Skanner News
Published: 06 October 2010 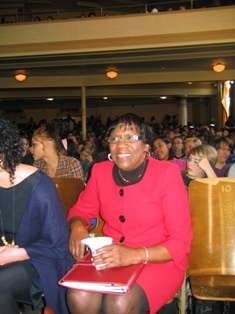 After raising nine children and three times as many grandchildren Margaret Carter knows what young people are experiencing.

The former state senator and current deputy director of the Oregon Department of Human Services, as well as others, brought that experience to the Grant High School student body on Wednesday following the murder of recent graduate Andre Payton on Sept. 26.
"I'm not talking to you, I'm talking with you," she said.
Ordering members of each class to stand up, she asked them for permission to address the crowd of young people.
They unanimously agreed.
Principal Vivian Orlen had opened the assembly with a poem by Payton titled "I'm From." She wanted to address the students after the murder, which was followed by another shooting shortly after Payton's funeral on Tuesday, Oct. 5.
"I never imagined that in the first months of being principal at Grant I'd be faced with having to lose a student," she told the crowd of students.
Joe McFerrin, president and CEO of Portland's Rosemary Anderson High School and 1987 graduate of Grant, told the young people that he had lost eight students since he'd been at the alternative school.
"We need to start letting the small things go," he said. "There always seems to be conflict over nothing … those small conflicts can turn into major conflicts."
McFerrin encouraged students to forge relationships – with teachers, coaches and fellow students.
"I'm tired of watching our young people die senselessly," he said. "It really hurts."
Aside from Orlen's opening remarks, much of the message for Grant students didn't address Payton's death directly, instead focusing on getting the most out of education, finding ideas to create a more cohesive student body and encouraging students to think beyond the moment.
"I want you to be so educated you make me look like a ninth grader," said Carter, encouraging students to become a "receptacle for knowledge." Throughout her remarks with the students, Carter's suggestions were met with massive applause and cheers of agreement.
She told students that they need to be more aware of their social networks and to keep in mind the power that the information age has provided.
"The bullying and cyber bullying must stop," she said to massive applause. "You need to assume responsibility for what you write on blogs."
She put it to the students themselves to solve some of the most basic problems of violence:
How do those who are untouched by violence get in and help stop violence committed by others?
How do you dissolve the cliques and social walls that separate students?
How do you begin thinking more about the future than you do the moment?
But she also admitted something that many students might be thinking: adults in charge don't often live up to their own lofty ideals.
"When a state gives more money to (criminal) justice than education, that is a problem," she said.