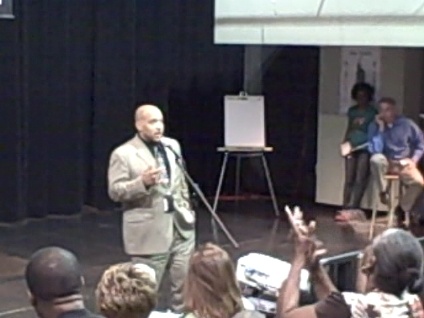 A campaign inspired by the tragic death of Andre Dupree Payton seeks to prevent any further shootings. Men from Portland's African American Community plan to make their presence felt at this week's football game between Grant and Benson high schools. They will be wearing buttons that say "Restore the Village," signifying that they are there to support and mentor and encourage black youth. The game will be held 7 p.m. Friday at Cleveland High School football field.
"Our black community here in Portland is very small, very intimate," said Sam Thompson, who works with youth helping them succeed in school. "We're like family. And we need to come together as family; we need to come up with a solution."
Thompson was the host at a community gathering at Self Enhancement Inc., in North Portland Wednesday night, which brought about 200 of Portland's African American community together to share solutions to the problem of gang violence.
"I don't ever want to hold somebody's mama and tell her 'it's all right', when I know her baby is not coming back," Thompson said. "I'm tired of burying these kids."
Thompson talked of his sadness at the loss of Payton, whose nicknames were Dre and Doe. The 19-year-old was shot dead last weekend.  He was the first speaker in an emotional discussion that moved through grief and anger, forgiveness and hope.
Thompson said the community has the power to prevent violence if people come together to look after young people around them. He called on black men and women to take the lead because black youth need caring adults to mentor them through difficult times.
Family and friends of the murdered teen were front and center of the gathering. They spoke movingly of his loving and generous nature. One of his sisters recounted that when the family only had one bed for all four children, Andre would give up the bed so his sisters could sleep. His brother Tonari Harris said he could not sleep because when he closes his eyes he sees his brother falling as someone - whose face he can't see - shoots him.
"I've lost the love of my life," his mother, Salena Harris, said. "If there is anyone out there who saw anything, I'm begging you -- please step forward."
Single mom Amitra Roberts said she felt unsure, as a woman, how to guide her 11-year-old son into manhood. "Portland is a limited city," she said. "It's a limited city in so many ways – especially for blacks."
Former NBA star Terrell Brandon, said young men who needed a safe place to talk were welcome to go into his barber shop on NE Alberta and 14th. 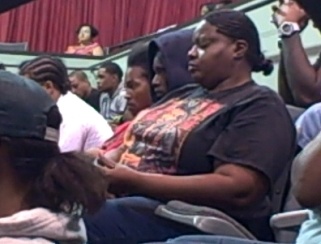 Other speakers spoke about their anger and frustration at the lack of employment and resources available to the African American community. But the focus was firmly fixed on what black Portlanders can do for black youth.
Dave Jackson, more familiar to many as hip hop Dj O.G. One, urged the community to "take a look in the mirror," and spoke directly to the teens in the auditorium. "You have brothers who will hold you down. You have to make the choice that you want me there – because it's by your permission."
Other speakers made commitments to help and mentor the young people. Two of the murdered youth's close friends, came forward.
"I won't see my boy again," said one, speaking with great emotion, like many others present. And he told the community that teens who join gangs have been let down in many ways. The two young men were offered support from outreach workers and others in the community.
Payton's grandmother, Tieleen Freeman had a message for them. "Baby, You, taught him what you knew," she said. 'The way we heal up is not to be mad at you for what you said., because we have to stop this right now. God has a plan."

Help the family with funeral and other expenses by contributing to a fund set up for Andre Dupree Payton at any US Bank.