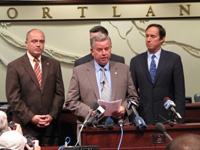 The Federal Bureau of Investigation allegedly attempted to recruit an informant inside City Hall, according to Mayor Tom Potter, who recently released an open letter to the community.

Federal authorities have since told the mayor that they know of no public corruption in Portland and are not conducting any investigation of the city.

In his letter, the mayor told the community that the attempt comes "at an uneasy time for many Americans. In the past few weeks, we have learned that our phone records are not private, and conversations are monitored without warrants.

Potter concludes in his letter that, in the absence of any suspicion of wrongdoing, the agency's actions smack of "Big Brother."

The mayor's complete letter can be read at www.portlandonline.com/mayor.

Potter said that on May 11 a special agent of the Portland Office of the Federal Bureau of Investigation stopped a city employee and showed her a badge and indentification.

He asked if she knew any City Council members and if she would be willing to pass information to him relating to people who work for the city of Portland. He said that while he had duties in other areas, the agency was always interested in information relating to white-collar crime.

"The only conclusion I can draw is that the agent in question was trying to place an informant inside the offices of Portland's elected officials and employees, in order to inform on the City Council and others," Potter added.

"The actions of the FBI — even if they are the actions of one agent acting on his own — come at an uneasy time for many Americans. In the past few weeks, we have learned that our phone records are not private, and conversations are monitored without warrants. Journalists exposing these actions have been threatened with prosecution."

Potter said that, even if this incident is nothing more than the work of one overzealous agent, "it represents an unacceptable mindset within the agency."

When there is no information to indicate any public corruption on the part of City Council members or employees, he said, the FBI has no legitimate role in surreptitiouslymonitoring elected officials and city employees.

The city will continue to cooperate with the FBI on investigating criminal activities and terrorism, Potter added, "but in the absence of any reasonable suspicion of wrongdoing, I believe the FBI's recent actions smack of 'Big Brother.' Spying on local government without justification or cause is not acceptable to me. I hope it is not acceptable to you, either."