Rose Festival Is Just Around the Corner

Nancy Mccarthy of The Skanner
Published: 31 May 2006

Although many longtime Portland residents reach for their raincoats when the Rose Festival begins, they also know that the beginning of June marks a time to celebrate all the city has to offer.

For 99 years, the Rose Festival has swept through town in June to honor the prolific rose, appreciate the city's pretty young women and give residents and guests alike a good time.

The two-day "Portland Rose Carnival and Fiesta" in 1907 has gradually grown and changed over the past century, until now it stretches from the "prelude events" in May to the "encore events" throughout June and even a Portland Rose Festival Charitable Foundation dinner and auction in October.

This year, the favorite events are still planned. Downtown Portland will be lit up by lights on the floats in the Portland General Electric/SOLV Starlight Parade on June 3. Roses will be judged during the Royal Rosarians' Rose Garden Contest June 4 and 5. The Fred Meyer Junior Parade will wind its way through the Hollywood District June 7. Sailors aboard the Rose Festival fleet are set to arrive between June 7 and 11.

Honored dignitaries are scheduled to kneel before the Rose Festival Queen during the Washington Park Knighting Ceremony on June 9. The Rose Cup Races are planned June 9 through 11, and the slower Dragon Boat Races will be held June 10 and ll. Of course, no one will want to miss the Southwest Airlines Grand Floral Parade on June 10.

The Rose Festival is no longer a city-centered event; it ranges far and wide — from Vancouver, Lincoln City and Salem to Welches, Estacada and Oregon City. 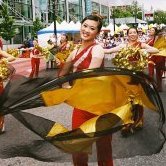 Local neighborhoods also are involved. The Royal Rosarians and the Rose Festival Court will visit the "Good in the Neigh-borhood" multicultural music and food festival at 11 a.m. June 24 at King School Park. The event runs through June 25.
It seems that just about everyone participates in the ever-expanding festival: Boy Scouts, musicians, actors, golfers, walkers and runners, wine aficionados, model railroad enthusiasts, gun collectors, baseball players and kite flyers.

There's something for everyone, and this year, there are several new events, including:

• Queen's coronation: After more than 30 years, the Queen's coronation returns to the Memorial Coliseum, but for the first time, the ceremony will occur immediately before the Southwest Airlines Grand Floral Parade. The event starts at 8:30 a.m. Saturday, June 10, in the Coliseum.

In addition, the village will feature a Civil War enactment campsite, open June 1 through 7 and a Ford exhibit, open June 8 through 11.

For more information about the Portland Rose Festival, or to check out the festival's event schedule, visit www.rosefestival.org.