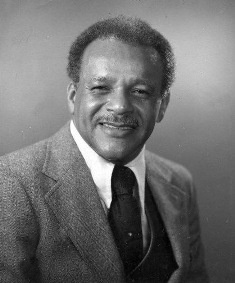 A beloved Portlander and pioneering Oregon pharmacist, Lawrence Edward ("Ed") Caldwell, Jr., 77, passed away peacefully on Sept. 7, 2010.
Ed's accomplishments in pharmacy were many. In 1960, Ed became the first African-American graduate of Oregon State University's College of Pharmacy, where he earned a Bachelor of Science and the coveted Kilmer Prize for research in pharmacognosy. In addition, his professional honors include the Ciba-Geigy Leadership Award, past president of the Oregon Society of Hospital Pharmacists, charter member of the Professional Society of Pharmacists board of directors and fellow of the American College of Apothecaries.
In 1971, he opened Portland Center Pharmacy, which he operated for nearly 15 years. Ed managed pharmacies throughout his career, including assistant chief pharmacist of Sacred Heart Hospital in Eugene, manager of Riggs Pharmacy in Lloyd Center, and director of pharmacy services for Providence Portland Medical Center. He finished his career in 2003 as a staff pharmacist at Providence St. Vincent Medical Center's outpatient pharmacy.
Ed's civic contributions rivaled his devotion to his profession. After graduating from Washington High School in 1952, he served two years in the U.S. Army's 88th Reconnaissance Company. He received an honorable discharge. From 1972 to the mid-1980s, Ed served as an appointee to several boards of directors, including the Portland Rose Festival Association. He led the development of the festival's Annual Stage Band Classic – a treasured achievement given his avid enjoyment of jazz music. His dedication to the community also includes appointments to state criminal justice and health committees by former Govs. Tom McCall and Robert W. Straub. Later in life, Ed enjoyed sharing his in-depth knowledge of Portland history in published works as a member of the Bosco-Milligan Foundation's community history committee.
A self-proclaimed "humble servant," Ed preferred to be remembered for his personal qualities – kind, culturally diverse, giving spirit – rather than accolades. He was quoted in an Oregon Journal feature article ("Black Druggist 'Makes It'") in 1971 as follows: "But don't make me out as the first person who ever did this or that, or a pace-setter, or something. We're only reflections of our experiences in life – like chemicals mixed together to form a compound. Nothing more."
Ed is preceded in death by his mother, Marcelene Guntz-Caldwell; his father, Lawrence Edward Caldwell; and siblings, Alfred and Delores. He is survived by his loving wife, Donna; sons, Lawrence Edward Caldwell III and Kristen Del Caldwell; daughter-in-law, Carol Marquez-Caldwell; brother, Gerald Caldwell; sisters, Rebecca Caldwell, Alcena Boozer and Nancy Caldwell; grandchildren, Jordan and Trevor Caldwell; and a close-knit extended family.
A memorial service will be held at 11 a.m., Wednesday, Sept. 15, in St. Philip the Deacon Episcopal Church, 120 NE Knott St. (near Rodney Ave.), Portland.
In lieu of flowers, donations may be sent to the Providence St. Vincent Medical Center Foundation and Oregon State University Foundation (please note "College of Pharmacy/PharmD Student Scholarships" on the check).