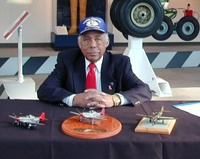 Visitors to the Museum of Flight over Memorial Day weekend, May 27 through 29, will have the rare opportunity to view a Boeing B-17 bomber up close and meet local members of the legendary Tuskegee Airmen of World War II — the contingent of African American aviators who won wide acclaim during the war.

On Monday, May 29, visitors can participate in a formal Memorial Day ceremony featuring remarks by Tuskegee Airmen. During the ceremony, veterans will read the names of Washingtonians who have fallen while serving in Iraq and Afghanistan.

In addition to the panel discussions and Memorial Day ceremony, the weekend's activities will include a fly-in by a visiting World War II Boeing B-17G bomber, hands-on family workshops, an honor guard from the Civil Air Patrol Overlake Squadron and special music performances.

The Tuskegee pilots achieved the unparalled distinction of never losing to enemy fighters a single bomber they were tasked with escorting. While the struggle to end discrimination and segregation in the U.S. military was a protracted one, the achievements of the Tuskegee Airmen stand as one of the most significant landmarks on the road to equality.