By Brian Stimson of The Skanner News
Published: 09 September 2010 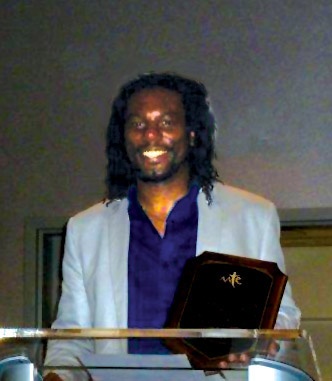 Lucky he was commissioned to create a play from a novel with good source material.
Lucky the author actually liked the performance.
And lucky it was actually published.
But luck had little to do with the hard work Jackson put in to transforming the written work into a stage play, nor did it have anything to do with the accolades and subsequent award he won for "Bud, Not Buddy."
Jackson, an alumnus of Portland's Jefferson High School, won the Distinguished Play Award from The American Alliance for Theatre and Education in August.
"'Bud, Not Buddy' is theatrical in its own sense," he told The Skanner News. "… I try to be honest to the material I'm working with."
For Jackson, who now lives in Seattle, his theatre roots all began in Portland. He participated in several plays while attending Jefferson High School.
"That's where I found it," he says, talking about his love of theatre. "I found my path through there."
Before that, television was his only experience with performance art, Jackson says.
"That's what I thought acting was," he said.
Although his experience at Jefferson is now a distant memory, the building blocks were lasting. Jackson now does acting, directing and adaptations for the Book-It Repertory Theatre; the same people who asked the playwright to adapt "Bud, Not Buddy."
When Book-It first approached him, Jackson hadn't read "Bud, Not Buddy," but was pleased when he read it. The spirit of the story, the characters all made for the perfect stage play.
Winner of the 2000 Newbery Medal and Coretta Scott King Award, the novel is a depression-era story of a 10-year-old orphan's search for his father, whom he has never met.
Jackson says there are largely two ways to adapt a novel into a play – utilizing a narrator for the book's dialogue, or by cutting out the narrative and utilizing dialogue to move the story.
For "Bud, Not Buddy," Jackson used the narrator-style adaptation, a style popular with Book-It. The style really works for the novel, allowing you, the viewer, to "close your eyes and hear the story," says Jackson.
"In either case, making sure you get the heart of the story is important, or you'll just bastardize the piece," he said. "I just respond to my first response. What really connects with me. I use myself as a benchmark."
As an actor who also does a lot of Shakespeare, Jackson says he is a person who revels in the use of different artistic forms of expression.
"Any chance to try something different, I try," he says. "I will always love the book, but I think there are so many different ways to do theatre. … It's something you're never finished with."
Because the theatre company needed permission to perform a full run of the adaptation, the author of "Bud, Not Buddy," Christopher Paul Curtis, was asked to attend the workshop. Curtis told Jackson that he got there expecting to hate it.
"Like many authors, they've seen their work turned into something they didn't write," Jackson said. "He was very impressed."
Curtis was so impressed that he approached Jackson during the intermission and asked him to adapt another one of his works, "The Watsons Go to Birmingham—1963."
"The Watsons" is a vastly different piece, says Jackson. He wanted it to be a "living room drama." Like "Bud, Not Buddy," Jackson's adaptation of "The Watsons" has been produced by theatre companies – rich and poor — all across the country. The different directions in which companies take the script varies greatly.
"The trip is a focal point of the story," he said. "One theatre bought this big huge car … yet some theatres with wooden blocks can do the same thing."
Getting an adaptation published is like having a child leave home, says Jackson. You hear what they're up to from time to time, but for the most part, you're in the dark. While many theatres have extended invitations to some see their version, many he simply hears about after the run.
Currently, Jackson is writing a new piece – he won't say what – and he'll be acting in the Seattle Repertory Theatre's March production of "Of Mice and Men." The versatile playwright will also be directing an education play for an upcoming Intiman Theatre educational outreach program.