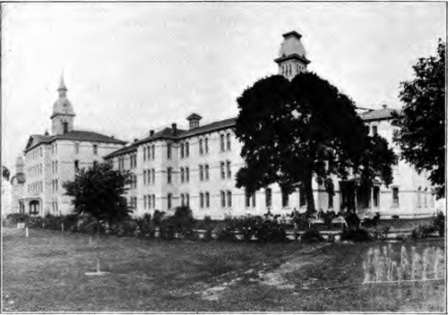 SALEM, Ore. (AP) -- A 127-year-old building at the Oregon State Hospital is getting a fresh coat of paint.
The J Building is considered a historic 19th-century landmark as one of the oldest psychiatric facilities on the West Coast, but is probably best known as the site for the 1975 movie ``One Flew Over the Cuckoo's Nest.''
The Statesman Journal reported the painting is part of a makeover of sections of the building, which is being renovated for a partial incorporation into a new psychiatric facility. Other sections of the J Building are scheduled for demolition.
New paint will provide long-term weather protection for the preserved building segments, officials said.
They said the reddish-brown paint color closely matches the original look and character of the facade. Workers also are brightening up wooden window frames with eggshell paint.
``We made agreements with the historians that we would select a color representative of the brick finish that it had when it was first built,'' said Linda Hammond, hospital replacement project administrator for the state Department of Human Services.
Segments of the J Building being fixed up are known as the Kirkbride U because of their shape and the fact that the architectural features were developed by Dr. Thomas Kirkbride of Pennsylvania, who pioneered some of the first national standards for mental hospitals in the 19th century.
The Kirkbride U segments date to 1883, when the hospital opened as the Oregon State Insane Asylum.
In recent years, the building's peeling facade and interior decay became glaring symbols of state neglect of Oregon's main mental hospital.
The new hospital complex will replace an obsolete collection of existing facilities, all built between 1883 and the mid-1950s.
The first patient-occupied sections of the new hospital is scheduled to open late this year, with the entire facility to become fully operational by late next year.