By Brian Stimson of The Skanner News
Published: 02 September 2010 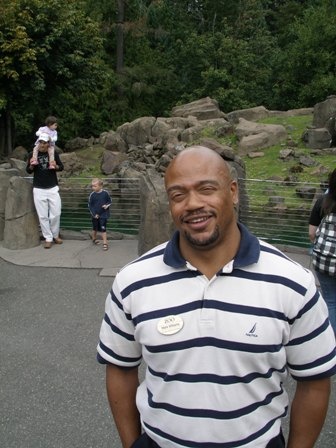 After working his way up for 20 years at the Oregon Convention Center, Event Services Director Mark Williams has moved on to different pastures. A pasture filled with lions, tigers and bears at the Oregon Zoo.

As the new business operations manager, Williams says he's having an absolutely wonderful time in his new position.
"It's right up my alley," he told The Skanner News. "It's even better than what I read in the job description. I'm doing things I like to do."
Although Williams doesn't deal with anything related to the animals, at least the ones in the cages, he does direct nearly everything else the human visitors touch. From the often overcrowded parking lot, to the ticket sellers, to souvenir store displays, Williams says he wants to make sure the visitor's experience is as enjoyable as possible.
"I think the zoo can really benefit from the talent and knowledge I have in terms of technology and efficiencies," he says. "I've always thought about different and new ways we can do things better."
But for the most part, much of the zoo is working fine, he says. He wants to hold off on price increases to make the visit easier on families. And apart from some improvements in point of sale, shuttle service and making sure lines move swiftly, he doesn't anticipate major change.
"Our customers, their lives evolve, their needs evolve and we need to evolve with them," he says.
But there is one matter sitting at the top of Williams' to-do list – parking. It's a constant gripe for zoo attendees and employees have to deal with the anger and frustration about a problem that has faced the zoo for more than 10 years.
"People are upset after rolling around the parking lot for half an hour to find a place to park," he said. "That impacts my people on the grounds every day. Whatever I can do to fix that problem or shield them from that, I will do."
The likelihood that Metro, the zoo's governing body, will hand Williams a big fat check to build a parking garage is slim, given the current economic realities. As a member of the parking committee for Washington Park, he will, however, lobby for that, and in the meantime, try to best promote the use of shuttles and light rail.
After a month on the job, Williams said he's also spent time with as many ground-level employees as he possibly can, learning about their jobs and the problems they might have.
Williams has taken an unconventional path up the corporate ladder. Although he's taken college-level business classes, he has never earned bachelor's degree, something he hopes one day to return to achieve.
Instead of the formal education, Williams learned on the job and was promoted from the inside at the Convention Center.
"If it wasn't for a few folks who believed in me at the time, I wouldn't have ever made it," he said.
He says he' still planning on returning to get that coveted piece of paper, something he's making sure his children earn.
"I tell my kids that I was one of the lucky ones, don't think you can just work hard every day and move up within the organization," he said.
Despite life experience, he still thinks there will be a lot to learn at school.
"With all the knowledge and experience I've gained over the years, I might get a little bit more out of a degree than the average Joe right out of high school," he said.
During his first year, Williams hopes to begin crafting a plan for the parking issue at the zoo. He's also dreaming about making the zoo an even better destination than it already is.
"I don't think anything's impossible," he said. "I do see the zoo sometime in the future incorporating other attractions for people to look at and experience when they're here."
With the dinosaur exhibit and an upcoming simulator exhibit, Williams thinks the zoo will have to step it up to keep up with an evolving public.
"Why not come here and experience the zoo and also a small waterpark," he said. "I mean, why not?"