Homeless Return to Camp After Eviction

By Brian Stimson of The Skanner News
Published: 02 September 2010

For a week, a group of homeless people had made a clean and well-organized camp in an industrial part of Portland. Nestled in between a fenced-off area of Water Bureau property and a blackberry-covered hill on North Wheeler Avenue, the residents thought they had discovered a perfect, out-of-the-way place to live.

Then, several days ago, one disgruntled resident contacted the city and reported the illegal camp. Police say they were ordered to evict the camp's residents by 3:30 p.m. on Tuesday, Aug. 31. But according to a Portland Police officer dispatched to the camp Tuesday afternoon, during roll call top brass said the eviction order was rescinded.
"We're not moving anyone today," he said. "We've been specifically told not to move anyone on any date."
A.L. "Skip" Osborne, director of the nonprofit Truth and Justice for All, was at the scene helping residents to coordinate their efforts. He was prepared to help residents in their fight against the city, but that appears to be put on the back burner.
As soon as the police made the comments to the few people still left at the camp, phone calls were quickly made to the camp's original organizers, who were staying temporarily with friends. 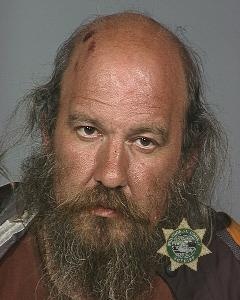 Many of the temporary structures – made from boxes, corrugated metal and pallets — had been torn down. Much of the destruction, says a homeless 17-year-old named Miroku, was made by Barry Joe Stull, a Green Party activist who is at the center of the camp's demise.
Gnossos, one of the camp's founders, says he is planning on returning to the camp as soon as he is able. Many other residents have already returned, but there are unconfirmed rumors that the city will make a final decision about the camp's future in 30 days.
Gnossos told The Skanner News that Stull had brought the camp to the attention of the city because of a disagreement with other residents, including Paris Collins, an African American. Stull had taken out a restraining order against Collins, which was allegedly based on false statements that Collins had been violently harassing Stull. The opposite is true, says Gnossos and several others who commented at the camp.
At about 6 a.m. on Aug. 31, Stull approached the sleeping Collins and assaulted him, according to Gnossos.
"Paris and I were asleep about 150 to 200 feet away from the camp," he told The Skanner News. "Barry came up ranting and raving … he hit Paris with a PVC pipe and jumped on his back."
The assault continued until Collins was able to get the 210-pound Stull off him, says Gnossos. Then the police arrived and arrested Stull. As of Sept. 1, Stull was lodged at the Multnomah County Detention Center on a charge of Assault IV and Harassment. Osborne says Collins has a welt the size of a tennis ball on his back.

In an email, Stull says that the assault was committed by Collins.

What's more, says Miroku, is that Stull was using racist terms in the days and hours before the assault.
"Barry uses the N-word all the time," he said.
According to Miroku, Stull called Collins a "nigger gangster," and accused him of being a police officer. A sign at the camp written by Gnossos directed former residents to steer clear of Stull. In his email, Stull did not address his use of offensive racist language.
"Barry Jo (sic) Stull has been aggressively attacking, harassing and threatening people in the area. Try to avoid, but if that isn't possible, consider legal reciprocation," says the sign. In a different hand writing, and addendum adds, "(or a bat to his face)."
Another sign, written on a torn piece of cardboard, with Paris Collins' name at the bottom, indicates he felt this camp was a change from sleeping in more dangerous areas of town.
"A SAFE PLACE. A place where I don't get kicked awake out of a dream by (Portland Police is crossed out, and the name Barry Joe Stull is written in). Where I don't wake up and find my shoes gone. Without bed bugs … Paris Collins, Free Camp Pioneer, 8/27/10."
And hopefully, it will be again. Gnossos says no one wants Stull back at the camp, although he says the camp is a free one. With a name Camp Pioneer, he says he and others won't kick Stull out, although he isn't welcome there.
"The only problem at the camp was Barry," he said.