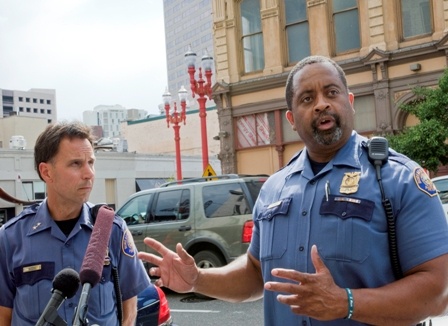 Newly-elected Portland Police Association President Daryl Turner sat down with The Skanner News last week to answer questions about his priorities in office and to sketch out big issues in the labor negotiations between the union and the city (this is Part 1 of our interview; check back for Part 2 next week). As the interview began, workers outside the police union building worked to replace several windows, and Turner switched a BlackBerry and an iPhone to silent mode.

The Skanner News: You don't have two phones. C'mon.

Daryl Turner: I lowered it to two phones.

SN: What did you have before?

SN: What I really wanted to talk about – because I never see or read it in interviews – is for the police union, we in the outside world we never hear what the real working conditions are for the police. I mean just looking at it from a purely labor union organizing point of view. But we do often hear from officers that members of the civilian world don't understand what it's like to be an officer and don't understand what the pressures are. So what I wanted to ask you was – what are the most important issues that officers have that they're negotiating on?

DT: I think the hardest the thing that looms most in our heads is obviously we're in the middle of contract negotiations which are at a standstill right now for several reasons. My number one goal right now – there are a lot of other things that are priorities two, three, four – but my number one priority right now is to get our contract settled. Get it settled in a way that's beneficial to the city, that's beneficial to management, and most of all that's beneficial to our members. We need to do that.
We are the largest agency between Seattle and San Francisco. In 2008 Seattle settled their contract with their city which gave them an optimum at the end of the contract of 25 percent raise thereabout. A 25 percent raise for senior officers, which is a 12 year officer. What they gave to the city of Seattle was basically the equivalent of our IPR. We have an IPR, we have a CRC, we have a performance review board, we have a collision review board, and many checks and balances.
We're not against those, what we are against is the fact that we cover more square miles than the city of Seattle police do, we take more calls for service than the city of Seattle's police agency does. They have larger agencies around them – they have King County, which is a huge agency, they have Pierce County, which is a huge agency.
In this area we are the largest agency, and our resources are used in Washington County, in Clackamas County. For the smaller agencies, our SERT team – which is the equivalent to everybody else's SWAT team – covers Gresham, Fairview, Troutdale, the smaller agencies, to help them do things. Our bomb squad covers a lot of the same areas and we go out East a lot of times, where they don't have bomb squads also. Just recently they went out to The Dalles on something. So we cover a lot of area, our resources are used up a lot for other things.
Also we're working at -- the national average for police officers, per capital, per thousand, is about 2.5, Seattle is right around 2.4 – we're at 1.6 per thousand. We're lean, we're lean as lean can be. With that our responsibilities, because of the fact that Seattle has more larger agencies around them that we don't have – we are the resource. So we need to be compensated fairly for that.
In the 2009 issue of Forbes magazine, they rated Portland as the third safest city in the United States. When it came to violent crimes they rated us number 1.

DT: The number 1 safest city in the United States in regards to violent crime. We're not asking for an exorbitant compensation – we're asking for a fair compensation. We're running lean, and we're still doing the job every day, and we're doing it in a way that we're engaging the community, where we engage management, where we engage the leaders in city hall. Yet we're not compensated equally with places like Seattle, which was number 4, and San Francisco, which was number 25. San Francisco, their top officers make 48 percent more than Portland's top officers.

SN: To make it really clear for those of us who are not great with percentages, can you give an average annual pay number? Can you just say the average officer makes $38,000 a year?

DT: Top step officer for the city of Portland makes around $71,000.

SN: Now that person can buy a house. In my mind I try to sort it out by can you buy a house in the city where you work. And I mean these houses in Portland are very expensive, and that's one of the complaints people have when they talk about police reform, that officers should be required to live in the neighborhoods of the cities where they patrol, but are you paid enough to be able to do that?

DT: The city of Portland has a pretty expensive housing market. But like I said, in San Francisco the top officers make 48 percent more. But the cost of living in San Francisco is not 48 percent more than the cost of living in Portland, it's not even close to that. Seattle makes about 25 percent more than that; the cost of living in Seattle is not 25 percent more than the cost of living in Portland. So with that said, we're not asking for exorbitant raises, we're not asking for Seattle-type money, we're not asking for San Francisco-type money. What we're asking for is compensation for what we do.
We're also first responders for – and I don't have a stat for this but I can tell you from my experience on the street we're probably first responders to about 70 percent of all mental health issues – at least 70 percent. And I would dare to say in the downtown core – my district was the Old Town area – I would say that 70 percent of my calls involved somebody with either mental health or developmental disabilities. So with that said, we're becoming people who deal with not only actual crime and criminals, we're also dealing with the mentally ill and the developmentally disabled, along with the elderly and the homeless. And sometimes that comes in one package, you get an elderly person who is developmentally disabled, with mental health problems and who is homeless. And that's not the exception to the rule – quite often that happens. And we're asked to put on these different hats and take on these different responsibilities for resources that, because of funding, have gone away from mental health, have gone away from elder care, have gone away from a lot of things. We are the ones who have to figure out how to make these things work, how to get people resources, and how to fix things for people when they're broken.
And the officers do it every day – the officers out there on the street do it every day. They talk to the community, they bond with the community, myself as the Portland Police Association president, I need to do the same thing. I need to go out there and talk to the community, bond with the community, bond with the community, as well as management here in the police bureau and city hall. And that's what I will do, I will not leave this office and feel successful unless I do that.
With that said my first priority is still settling that contract, because that gives our members a chance to then concentrate on other things. I know we're going to lose resources. We're going to continue to lose resources. I know we're going to continue to have issues in the community that we'll be tested on. But with those relationships in the community, with those relationships with management, and with those relationships with city hall, we'll be able to at least have a conversation in a manner that's respectful and friendly, and not adversarial, and not where information isn't given to the people who need it so that they can make those assessments whether they agree with us or not, at least they're not putting out false information causing paranoia in the community.