Get Your Green On: PDC's Small Business Green Grant Program 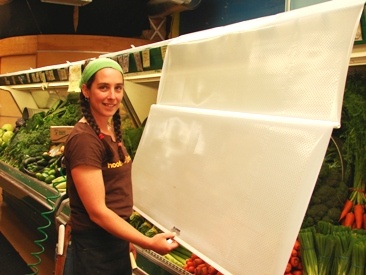 What if small business owners could find a way to become greener and more sustainable – and, at the same time, cut down their costs? We're talking about everything from solar panels, eco roofs and storm water management to low-budget fixes such as energy-saving lighting, composting and efficient insulation and heating systems.
Now imagine you can get a grant to help you make your business greener. If this looks like an offer you can't refuse, take a look at Portland Development Commission's Green Features Grants program.
"Research really shows us that small businesses are the last to see value in investing in sustainability," says Stephen Green, (yes that's his real name!) project manager for the program. But after learning what can be done –
and the kinds of help available — about a dozen businesses made improvements that changed their minds. "Going green really contributed to the bottom line," he says. "Instead of costing them more money, they are making cost savings."
Of course if you want to take advantage of this year's grant money, you'll have to work fast. The closing date for this year's applications is Aug. 27. But even if that timeline turns out too be too short to identify the best green changes for your business, now is the time to get in line for next year.
Grants of up to $50,000 are available, with the average grant around $20,000. The program is open to any small business in the Interstate Urban Renewal area, but will expand to include the Lents Urban Renewal area next year. 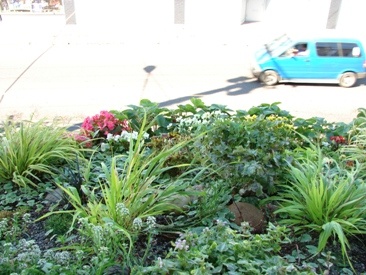 It's Stuff You Don't See
With help and advice from the City's BEST Business Center, you could be surprised by how little effort it takes to start getting your green on. A team of six experts is on hand to suggest the improvements that will benefit you – and generations to come – the most. BEST works with businesses all over the city helping them identify useful resources, including the PDC Green Features Grants.
"What the businesses found was that a consultation with BEST was really very helpful for them," said Stephen Green .
'They find they can start capturing efficiencies now."
Amanda Wiles of Cherry Sprout Produce market, on N. Sumner Street near Jefferson High School, agreed. The store has made a host of energy saving improvements, with the help of a $25,000 green features grant.
"It was something we'd never have been able to do as a small business," said Wiles one of three women who started the store. "We replaced all the lighting in the whole building with energy efficient lighting. We got new walk-in coolers, and put doors between our two walk-in freezers. It's all stuff you can't see."
But the savings will be visible, Wiles says, especially in winter.
"Initially we were thinking we would have to get new produce coolers because they were really old," "she says. Replacing four old and inefficient display coolers would cost $60,000, but instead the audit suggested retrofitting the existing coolers with energy efficient motors and lighting. This cost many thousands less, Wiles said.
"So we were able to prolong the life of the coolers and prevent them from going into the landfill."
One other small change to the coolers is likely to reduce the store's heating bills this winter. Wiles and her partners installed covers called nightshades which help keep the produce cold at night, and prevent the cold air from escaping into the shop.
"With these nightshades the cooler doesn't have to work so hard all night and the room stays warmer so we won't have to crank up the heating in winter. And it keeps the produce fresher longer." 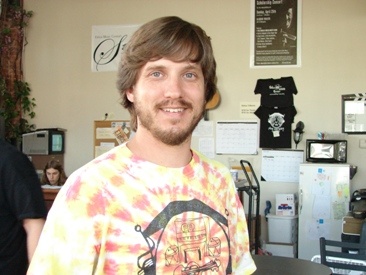 Practical -- and Pretty Too
The grants cover improvements that deliver permanent benefits. Ethos Music Center, for example, has installed solar energy panels, an eco roof, an eco garden, insulation, a giant cistern to collect stormwater --- and they're not finished yet.
"We want to be the first music school in the country to generate all our own electricity onsite," says Charles Lewis, founder of the nonprofit. "PDC has been a great partner. They helped us with solar panels. And now we have a $150,000 grant from the Kresge Foundation that will help us put in more solar panels."
About 800 children take music lessons in the Ethos building, on North Killingsworth Street near The Skanner's offices. And the program also serves another 2,300 children in rural Oregon. The improvements also mean that toilets are flushed with rain water - saving precious city drinking water. And old appliances have been replaced with energy efficient ones. The eco garden and an eco roof garden help reduce runoff and water pollution – and beautify the neighborhood at the same time.
Lewis doesn't have to stop and think when The Skanner asks which improvements have been the quickest money saver for Ethos.
"Insulation," he says. "We've saved a ton of money from the insulation. It's cut our heating and cooling bills in half.
"That I'd recommend anyone to do. It's shocking."