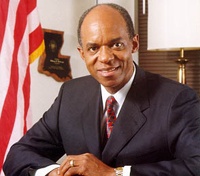 It was not clear what agents were looking for and Weierman said she could provide no additional details because the affidavit supporting the search warrant was sealed.

Jefferson's lawyer, Robert Trout, complained that FBI agents refused to allow him or the general counsel of the House of Representatives to witness the search.

"The government's actions in obtaining a search warrant to search the offices of a United States Congressman were outrageous," Trout said in a statement issued late Saturday. "There were no exigent circumstances necessitating this action. The government knew that the documents were being appropriately preserved while proper procedures were being followed. We are dismayed by this action. The documents weren't going anywhere and the prosecutors knew it."

FBI agents searched Jefferson's homes in Washington and New Orleans last August, hauling away boxes and bags from one of the residences.

Jefferson, a Democrat in his eighth congressional term, had declared his innocence Monday during news conference outside the federal building in New Orleans and said he will not resign in the face of the investigation that has resulted in guilty pleas from two people who implicated him in a bribery scheme.

Vernon Jackson, chief executive of iGate Inc., a Louisville, Ky., telecommunications firm, subsequently pleaded guilty to bribery, admitting he paid hundreds of thousands of dollars to Jefferson and his family members in exchange for the congressman's help obtaining business deals in Nigeria, Ghana and Cameroon.

The House Ethics Committee has opened an inquiry into the case.