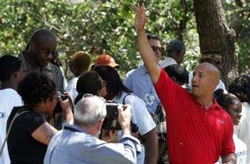 NEW ORLEANS—Mayor Ray Nagin, whose shoot-from-the-hip style was both praised and scorned after Hurricane Katrina, narrowly won re-election over Lt. Gov. Mitch Landrieu on Saturday in the race to oversee one of the biggest rebuilding projects in U.S. history.

"We are ready to take off. We have citizens around the country who want to come back to the city of New Orleans, and we're going to get them all back," Nagin said in a joyful victory speech that took on the tone of Sunday sermon.

With all 442 precincts reporting, Nagin won with 52.3 percent, or 59,460 votes, to Landrieu's 47.7 percent, or 54,131 votes. Results showed he got Black votes he needed from scattered residents across the country who voted by fax and absentee ballots, and got a sizable crossover vote from White districts.

Nagin, a former cable television executive first elected to public office in 2002, had argued the city could ill-afford to change course just as rebuilding gathered steam.

His second term begins a day before the June 1 start of the next hurricane season in a city where streets are still strewn with rusting, mud-covered cars and entire neighborhoods consist of homes that are empty shells.

With little disagreement on the major issues — the right of residents to rebuild in all areas and the urgent need for federal aid for recovery and top-notch levees — the race came down to a referendum on leadership styles.

Nagin, a janitor's son from a Black, working-class neighborhood, is known for his improvisational, some say impulsive, rhetoric. After Katrina plunged his city into chaos, Nagin was both scorned and praised for a tearful plea for the federal government to "get off their (behinds) and do something" and his now-famous remark that God intended New Orleans to be a "chocolate" city.

In his victory speech, Nagin reached out to President George W. Bush, thanking him for keeping his commitment to bring billions of dollars for levees, housing and incentives to the city.

And as for Louisiana Gov. Kathleen Blanco, with whom he feuded as his city descended into chaos, Nagin thanked her "for what she's getting ready to do."

Landrieu, who served 16 years in the state House before being elected to his current post of lieutenant governor two years ago, is the scion of a political dynasty known as Louisiana's version of the Kennedys. He is the brother of Sen. Mary Landrieu and had hoped to be the first white mayor in a generation, since his father, Moon Landrieu, left office in 1978.
In conceded the race, Landrieu echoed the theme of his campaign — a call for unity.

"One thing is for sure — that we as a people have got to come together so we can speak with one voice and one purpose," he said. "Join with me in supporting Mayor Nagin."

Fewer than half of New Orleans' 455,000 pre-Katrina residents are living in the city, and a large number of Blacks scattered by the storm have yet to return.

Evacuees arrived by bus from as far as Atlanta and Houston to vote. More than 25,000 ballots were cast early by mail or fax or at satellite polling places set up around Louisiana earlier in the month — 5,000 more than were cast early in the primary.

Turnout appeared to be on-par with the April 22 primary, when about 37 percent of eligible voters cast ballots.

Nagin, who had widespread support from White voters four years ago, lost much of that support in the primary but got a much stronger showing this time.

Voter Elliot Pernell was philosophical about his vote for Nagin.

"He's been through the experience already," he said, "and won't make the same mistakes."

Among the first to vote was 61-year-old Alice Howard, who was rescued after three days on her roof following Katrina and evacuated to Houston.

"I want the city to come back," she said. "This is my city. This is home to me. ... I want to make sure the correct person takes care of home."