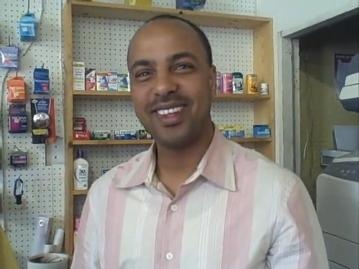 Williams Street Market sells everything you'd expect from a convenience store ... and a few things you might not expect. Because business owner Tamarat Alemu has roots in Ethiopia, he also stocks traditional Ethiopian Enjarra bread, gluten-free Teff flour and raw coffee beans to roast at home – for about $6 a pound.
"That's one of the traditions back home," Amelu told The Skanner. "You just use the amount you want to consume that morning and the smell of the roasting coffee goes all through the house."
The Skanner News Video: Coffee roasting demo.
Amelu demonstrated his simple roasting technique using a skillet over a medium heat. –"You have to keep stirring until it gets golden or dark brown," he says. "Don't burn them." At-home roasters can experiment to see how the taste changes as the roasted beans change from golden to a darker brown.
When Amelu first started out as a business owner in 2004, he opened a small shop inside Jimmy's Cleaners, now located a block away on the corner of Fremont and Vancouver. Owner Jimmy Wilson and Amelu are still close.
"He is one of the best people I have met – he has been a bridge for me," Amelu says. "We are great friends—we are family."
And Wilson says of Amelu, "Don't call him my friend, I call him my son."
Problems with the building they were leasing meant both men had to find new premises in 2008. Wilson, who runs his dry cleaning business with his wife, Quanita, was working with the small business nonprofit Microenterprise Services of Oregon, hoping to develop his expertise and expand his business. As MESO helped Wilson thrive, he introduced Amelu and several other small business owners, to the program.
"We met with them as a group," Amelu says. "We all presented our business plans. It was a critical time for most of us."
Amelu wanted to keep his busuness in the neighborhood. He has lived in this part of North Portland for 10 years and feels at home here. "This is one of the best neighborhoods with the best people," he says.
But when he moved into his current location at 3508 N. Williams, his new premises had no window shades and no air conditioning. Amelu's candy was melting in the summer heat. But MESO stepped in with help to buy window blinds – and later a walk-in cooler.
"That's a loan I couldn't have got on my own," Amelu said.  He also appreciated the technical assistance he got from MESO. "You learn from other businesses and get encouragement," he said.

Amelu always wanted to run his own business. Back in Ethiopia his family had owned restaurants, so he already knew that having your own business means working hard and putting in long hours. He didn't have any capital, so he worked at Plaid Pantry and Seven-11, hoping to someday open his own convenience store. Thirteen years later, with a little help from his family, friends and MESO, Tamarat Amelu's dream is a reality.
"I'd like to bring in more of the things the neighborhood needs, and also specialize in ethnic, cultural and local items," he says.
Already, word has spread about Amelu's coffee. From Yirgacheffee, the beans belong to the high-quality Arabica family. The taste is clean and sweet with no trace of bitterness.  Ethiopian coffee is known to be some of the world's best. It's the country's largest export.
Amelu wants to bring a little bit of Ethiopia to North Portland. And he wants to return the kindness he has found in this neighborhood. Now he has subleased part of his building to a bicycle repair shop -- giving a start to another business. But he says his proudest moment was when a neighborhood man, someone with a difficult past, told him he'd helped him turn around his life.
"He told me 'you changed my life'," Amelu said. "I was shocked. Those were the most satisfying words I've ever heard in my life."