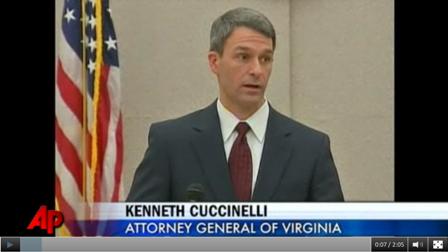 WASHINGTON (AP) — President Barack Obama's historic health care overhaul hit its first major legal roadblock Monday, thrown into doubt by a federal judge's declaration that the heart of the sweeping legislation is unconstitutional. The decision handed Republican foes ammunition for their repeal effort next year as the law heads for almost certain eventual judgment by the U.S. Supreme Court.

The ruling by U.S. District Judge Henry E. Hudson, a Republican appointee in Richmond, Va., marked the first successful court challenge to any portion of the new law, following two earlier rulings in its favor by Democratic-appointed judges.

The law's central requirement for nearly all Americans to carry insurance is unconstitutional, well beyond Congress' power to mandate, Hudson ruled, agreeing with the argument of Virginia's Republican attorney general — and many of the GOP lawmakers who will take control of the U.S. House in January. Hudson denied Virginia's request to strike down the law in its entirety or block it from being implemented while his ruling is appealed by the Obama administration.

"An individual's personal decision to purchase — or decline to purchase — health insurance from a private provider is beyond the historical reach of the Commerce Clause," said Hudson, a 2002 appointee of President George W. Bush.

Nevertheless, the White House predicted it would prevail in the Supreme Court, although it may be a year or two before the health care law gets there. The next step for the Virginia lawsuit is the 4th U.S. Circuit Court of Appeals in Richmond, where Democratic-appointed judges hold a majority.

In an interview with television station WFLA in Tampa, Fla., on Monday, Obama emphasized that other judges had either found the law constitutional or dismissed lawsuits against it.

But in the short term, the latest court ruling hands potent ammunition to GOP opponents as they prepare to assert control in the new Congress with promises to repeal the law. Obama in turn has promised to veto any repeal legislation and appears likely to be able to prevail since Democrats retain control of the Senate. Republicans also have discussed trying to starve the law of funding.

Whatever the eventual outcome, Monday's ruling could create uncertainty around the administration's efforts to gradually put into effect the landmark legislation extending health coverage to 32 million uninsured Americans. And it can only increase the public's skepticism, which has not significantly receded in the months since the law's enactment, defying Obama's prediction that it would become more popular as the public got to know it.

Obama aides said implementation would not be affected, noting that the individual insurance requirement and other major portions of the legislation don't take effect until 2014.

Underscoring the potential for Hudson's ruling to become a political cudgel for the new Republican House majority, incoming House Speaker John Boehner, R-Ohio, quickly cautioned states against "investing time and resources in Obamacare's implementation now that its central mandate has been ruled unconstitutional."

"Republicans have made a pledge to America to repeal this job-killing health care law, and that's what we're going to do," said Boehner. Calls to repeal the law were a staple of tea party campaign rallies this year.

Other lawsuits are going forward, including one by 20 states that gets under way Thursday in Florida. That suit also challenges whether the federal government can require states to expand their Medicaid programs.

The suit that was decided on Monday had gained a high profile because it was pursued by Virginia's outspoken attorney general, Ken Cuccinelli. The two earlier cases decided in favor of the administration were brought by little-known legal entities.

In his ruling, Hudson largely agreed with Cuccinelli's argument that Congress exceeded its authority, and he dismissed the Justice Department's argument that the insurance-buying requirement would come under the definition of regulating interstate commerce, a power given to Congress by the Constitution.

The mandate for people to buy insurance "is neither within the letter nor the spirit of the Constitution," the judge said.

Hudson limited his ruling to striking down the so-called individual mandate, leaving intact other portions of the law — something supporters cast as a victory. But administration officials and outside analysts agree that important provisions of the legislation could not go forward without the requirement for everyone to be insured. That's because insurers need to have large pools of healthy people, who are cheap to insure, or it is not financially tenable for them to extend coverage to anyone with a pre-existing condition or guarantee certain policies to nearly all comers.

Some provisions of the law took effect in September, six months after its passage, including free preventive care, an elimination of lifetime limits on coverage and a requirement for insurers to allow adult children to stay on their parents' health plans until age 26.

Hudson recognized that his would not be the last word on the subject.

"The final word will undoubtedly reside with a higher court," he wrote.

White House health reform director Nancy-Ann DeParle said the administration is encouraged by the two other judges — in Virginia and Michigan — who have upheld the law. She said the Justice Department is reviewing Hudson's ruling.

In contrast to Hudson's ruling, the judges in Michigan and Virginia, both appointed by President Bill Clinton, said the purchase requirement was allowable under the Constitution.