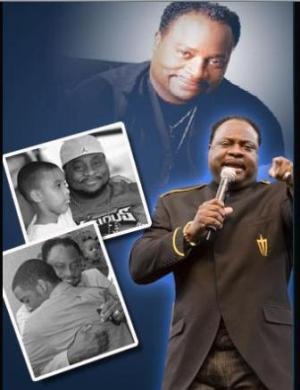 ATLANTA (AP) -- On Sunday mornings, accused megachurch Bishop Eddie Long is usually draped in regal robes and dripping with diamonds and platinum - the kind of material rewards he often says are in God's plan for those listening.
His message expected this Sunday will be the first in public since three young men accused him in lawsuits of having sexual relationships with them, which he has vehemently denied only through his lawyer and a Twitter posting.
Long built his congregation into a megachurch empire, telling his followers God wanted them to be wealthy and delivering fiery sermons with a secular swagger. He hangs with celebrities like rapper T.I. and donates money to charities and candidates. Even the county sheriff is among his followers.
Long spent more than 20 years building all that up, but his empire hangs in the balance. And his 25,000 followers aren't about to let it all come tumbling down after the three men's claims that the bishop abused his spiritual authority.
"I've always thought he was a very powerful man of God," said Anshay Tull, a 27-year-old attendee of Long's church, New Birth Missionary Baptist Church. "I'm just praying, trying to stay hopeful that it's not true. If it is true, he has to take that up with God. But that can't take away from the Word that he gives. I think he's very gifted."
He's preached against gay marriage, and his church has counseled gay members to become straight - even though the men claim in their lawsuits that Long used money, cars, international trips, jewelry and other objects to lure them into sexual relationships when they were 17 or 18 years old.
Long came to New Birth in 1987, when it had just a few hundred members. He had a flock of 8,000 just four years later and moved the church into a $2 million building. By 1995, the church's weekly television broadcast was airing in more than 170 countries. By Long's 10th anniversary, New Birth paid off its debts and for 240 acres of land to build a multi-million dollar church complex.
The church grew alongside its home of DeKalb County, now the second-largest in the state. It has one of the most affluent populations of African-Americans in the country, many of whom attend New Birth. Long's message of prosperity has dovetailed with their goals and dreams, as is evidenced by the many luxury cars in the parking lot on Sundays.
Long himself is a product of his message. His home was bought for $1.1 million in 2005.
"He has a kind of celebrity status, given his megachurch leadership," said Emory University religion professor Theophus H. Smith. "And Bishop Long has been especially noteworthy in terms of making a place for men's spirituality and black male manhood in the church."
Despite the church's economic and political power, though, it faces a somewhat uncertain future.
"People who are members at that church probably felt better about themselves because they are members," said Lester Spence, a professor at Johns Hopkins University. "Now, there are a whole bunch of people trying to figure out what their place is, what's going to happen to the church and what's going to happen to them."
Today, New Birth operates more than 40 ministries. The centerpiece of its campus is the $50-million New Birth Cathedral, which opened in 2001 and seats 10,000. Membership stands at more than 25,000, and New Birth flags flying from car windows are a common sight around metro Atlanta.
Long is married to Vanessa - referred to as "The First Lady" of New Birth - and the couple has three sons and a daughter.
There are those turned off by the church's size and its message, including former member Zack Hosley, 31, who criticized Long's rich lifestyle.
"If you see (Long) out and about in Atlanta, he rubs elbows with celebrities and I just wouldn't think a man of God would be hanging out with T.I," he said, referring to the Atlanta-based rapper who served time on federal weapons charges and recently was arrested on drug charges.
He is beloved by his congregation, though, which has dismissed the accusations as a test from God. After he canceled both an interview on a popular syndicated radio show and a scheduled news conference, Long is expected to address New Birth members Sunday during church.
His lone remarks have been a statement read by his attorney and a Twitter posting: "Thanks for all the prayers and support! Love you all."
"I wish the bishop would come out and make a comment and speak to us," said Lance Robertson, a longtime church member. "We want to hear from him. I think the world wants to hear from him. Right now, in the court of public opinion, it does not look good."
---
Associated Press Writer Tom Breen contributed to this report from Raleigh, N.C.