Marathon City Council Meeting on Police to Be Continued

The Portland City Council Thursday voted to continue public testimony and debate on police accountability on March 31 at 6 p.m. in Council Chambers at City Hall. 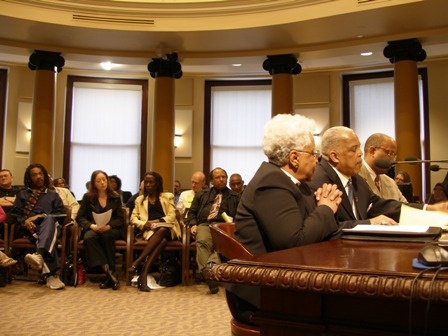 Hours and hours of testimony were underway at presstime Thursday afternoon as the Portland City Council prepared to address Commissioner Randy Leonard and City Auditor Yvonne Griffin-Valade's proposal to tighten civilian oversight of the police bureau.
The proposal would establish a new oversight board and would give the Independent Police Review Committee director subpoena power to compel witness testimony in investigating complaints against police officers; would require her to evaluate internal affairs investigations; and would also reaffirm the IPR director's power to hold an independent investigation; among other things.
While two hours were set aside for the hearing, it appeared that it would last on into the night.

The continuation of the issue two weeks from now will allow participation by Chief Rosie Sizer, whio is in England on a business trip.
"Shootings and deaths in custody -- I think that we've reached a point where we have to have oversight on those investigations, oversight by the IPR," said Citizen's Review Committee Chair Michael Bigham. "In Denver the IPR personnel roll out with the detectives when there's a shooting or death in custody, and I think that the IPR should be able to monitor those investigations from day one, rather than hire a consultant later. I don't think that's productive anymore."
"The James Chasse investigation took four years and basically is still running--I hope the Aaron Campbell case doesn't take as long," Bigham said.
"Last Feb 10 we heard a case, the Frank Waterhouse case, where we challenged the bureau's findings—we still haven't heard back from the bureau on whether they're going to accept that challenge or not. I think there need to be definite timelines for both the IPR and the Internal Affairs and the bureau on how the handle the cases."
Portland police union negotiator Will Aitchison called the ordinance "clearly unconstitutional."
Aitchison said many city agencies have proposed changes in how the bureau operates, including changes in oversight, discipline, and how officers are treated after critical incidents. He also cited the release to the public of the Grand Jury testimony in the Aaron Campbell shooting as well as the effort by the city to open up Portland Police Association union bargaining to the public.
"There is a common thread through all of those, and the common thread is that not one of those were preceeded by dialogue with your employees, the Portland police," Aitchison said.
"Working together we have made major changes in the police bureau. What we are asking mayor is that you involve us in this process before you move down a road that is precipitous," Aitchison said.
Leonard responded that he had known and respected Aitchison as a labor laywer for years, but that in fact he had met and discussed the ordinance with union President Scott Westerman before finalizing it.
But, Leonard said, "In the latest issue of the Rap Sheet there is no encouragement to participate in this discussion when it refers to the IPR as the Gestapo."
"We sincerely regret that comment," Aitchison said.
Gary Clay was particularly eloquent – and outraged – in his testimony.
"I feel like when it comes to the African American, the Brown and the mental, and the poor, that there's a new gang in town that's wearing blue and a badge with PPB on it. I really do," he said.
Clay invoked the repeated incidents involving Officer Chris Humphries, including the beating death of James Chasse in 2006 and his violent arrest of a pre-teen on a TriMet train last December.
"There's a lot of things I can't understand what's going on," Clay said. "Why was this man still on the streets? To shoot a 12-year-old African American girl? With a bean bag gun? How can they get away with that? How can he ever get away with that there?"
Clay also had sharp words of criticism for city commissioners.
"Tell me, something else I don't understand – you're coming up to our community churches now, with your soldiers, but you're coming after a death. I'd rather see you coming after a birth than a death," he said.
"You ask me if I'm mad? You're damn right I'm mad. Because I have to wonder each and every day if one of my kids will end up dead.
"So tell me what is the solution," Clay said. "It can't be money? How you going to value someone's life? I killed your son, I killed your daughter, here you go a few thousand dollars. That's not the solution.
"Sam you remember a few years ago, right here at a police reform meeting with a high official police officer, thinks we still owe them an apology after the killing of Kendra James," Clay said. "And you said yourself that you was raised up to be prejudiced, and you got to a certain age you decided not to be prejudiced -- you decide to do the right thing.
"I just…I just don't know. I feel like I'm living in a city with Mothers Against Drunk Drivers, but I need to be living in a city with Mothers Against Murdered Sons," Clay said
"I feel like this should be a committee on the federal level to investigate these shootings. That's all I got to say."