Nypd Report: Most of Those 'Stopped and Frisked' Are Minorities 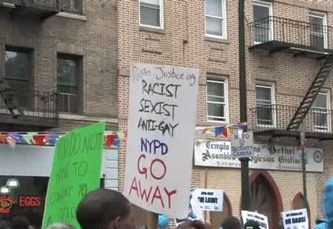 NEW YORK (CNN) -- Nearly nine out of 10 people "stopped and frisked" under a controversial New York Police Department policy in 2011 were African-American or Hispanic.

The data comes from a report released by the NYPD Monday, which showed that of the 685,724 stops made by police that year, 53% of those questioned were black, 34% were Latino, 9% were white and 3% were Asian.

Brooklyn's 75th precinct, which includes East New York and Cypress Hills, had the most "stop and frisk" incidents with 31,100. Of those, 97% of the people involved were either black or Hispanic.

The top reason for stop-and-frisks in 2011 was for suspicion of weapons possession, accounting for more than 25% of all stops.

The much-criticized method, in which police stop, question and possibly search those they consider suspicious, is used to deter crime, the police department has said.

But it has also brought on a slew of lawsuits by residents complaining of unlawful stops.

Under the policies, officers report all "stop and frisk" encounters at a local level, and are provided training curriculum and videos, Kelly said. There are also programs reaching out to the community, he said.

Kelly said at the time that the department prohibits racial profiling and aims to ensure a "greater level of scrutiny" by having captains of precincts "personally conducting an audit of the Stop, Question and Frisk report worksheets that have been prepared within his or her command."

The NYPD report did not list how many of the stop-and-frisks resulted in arrests.