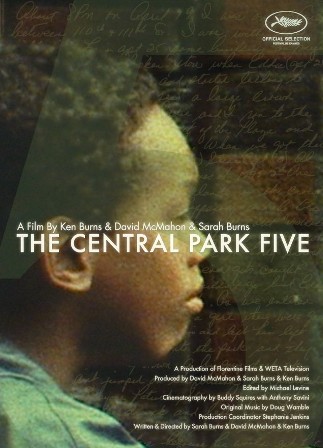 Florentine Films filmmakers Ken Burns, Sarah Burns and David McMahon issued the following statement in response to a subpoena from the City of New York requesting notes, outtakes and other materials related to their new film, "The Central Park Five," the story of the five young men who were wrongfully convicted for the 1989 rape of a jogger in Central Park.

"We have long expected the subpoena," said Ken Burns, Sarah Burns and David McMahon, the film's directors.  "For the last ten years the City has refused to settle the civil rights lawsuit brought by these young men.  This strikes us as just another effort delay and deny closure and justice to these five men, each of whom was cleared of guilt even though they served out their full and unjustified terms.

"As you can imagine, we strongly believe in the media's right to investigate and report on these and other issues and that this process, including the reporting notes and outtakes, come under the New York reporters' shield law. The government has an exacting burden before it can obtain these and other materials."

"The Central Park Five" examines how the legal system's rush to judgment—fueled by a city racially divided and fearful of crime—resulted in false confessions and no reassessment of the charges as conflicting evidence came in.  This left a brutal rapist on the streets and robbed five innocent kids of their youth, all of whom served out their full terms.  District Attorney Robert Morgenthau, after directing a thorough re-investigation when the actual rapist came forward and confessed, and realizing his office's mistakes, joined with the defense to request that the convictions be vacated, which was instantly granted by Judge Charles Tejada.

In a letter to the City's Law Department, John Siegal, the attorney retained by Florentine Films, explained that the subpoena was "overbroad," since it seeks all materials the filmmakers collected in the course of researching, shooting and editing the film.  "The subpoena served by your office is neither appropriate nor enforceable under the governing law for subpoenas served on professional journalists exercising their right of independent free speech and comment on a matter of public importance," Mr. Siegal wrote.

"Florentine Films has carefully considered the subpoena and is sensitive to the important work performed by your office and the issues involved in the case.  But, due to a deeply held belief that its future ability to make films about matters of public interest would be compromised by complying with the subpoena, Florentine Films respectfully intends to invoke its constitutional and statutory rights and withhold the unpublished materials sought by your office."

In the letter, Mr. Siegal explained as well that Florentine Films has had no financial relationship with those interviewed in the film, nor with any of their representatives.