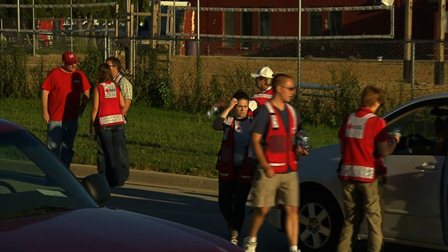 OAK CREEK, Wisconsin (CNN) -- Community members are coming together to seek emotional healing in the wake of Sunday's shooting spree that killed six people and wounded four at a religious service in a Milwaukee suburb.

For a third consecutive night, mourners and supporters will hold a vigil Tuesday, CNN affiliate WTMJ-TV reported, to remember the dead, pray for the wounded and grapple with grief and shock.

An Army veteran who neighbors say played in a far-right punk band was the lone gunman in the rampage at a Sikh temple in Oak Creek, Wisconsin, according to information Monday from law enforcement authorities.

Wade Michael Page, 40, was shot to death by police responding to the attack, the community's chief of police told reporters.

Hundreds attended a memorial for the victims at a Sikh center in the town of Brookfield Monday, with the line of supporters overflowing outside the temple, WTMJ reported.

"This is one very large community," said Deanna Singh, who attended the service. "We're all one huge family."

"I think it's a sad day for all of us. It's horrific what happened," said Harbander Sithi.

Sunday's attack in Oak Creek occurred 16 days after a gunman killed 12 people and wounded scores at a movie theater in Aurora, Colorado.

Oak Creek Mayor Stephen Scaffidi said Monday that he spoke with Aurora's mayor to get some advice on how to cope with the tragedy.

"He gave me some pointers and some suggestions on how to not only deal with the immediate but how we deal with the next few weeks," Scaffidi said, pointing out that the Colorado town was in its third week of coping.

Worshipers at the temple in Brookfield, which is also a Milwaukee suburb, began fearing for their own safety on the morning of the shooting spree in Oak Creek, when they received calls from friends informing them of the tragedy, said one Sikh devotee.

"If there is a shooter over there, is somebody else heading over here?" he asked, describing the fears of the congregation.

Although the Sikh religion is not affiliated with Islam, Sikh men, who wear head coverings and let their beards grow, have been subject to Islamophobic hate crimes by perpetrators mistaking them for Muslims.

"We always feared this since 9/11, that someday this thing might happen. It did happen on a smaller level, but not on this level," Gurcharan Singh Grewal, president of Sikh Temple in Brookfield, told CNN affiliate WITI.

President Barack Obama ordered U.S. flags flown at half-staff through Friday "as a mark of respect for the victims of the senseless acts of violence."

The shootings in Oak Creek and in Aurora have heated up the debate on gun control as election campaigns are in full swing in the United States, and although both Obama and Republican challenger Mitt Romney have condemned the violence and expressed condolences to victims' families, tightening access to guns has remained a political hot potato.

New York Mayor Michael Bloomberg, an independent and an outspoken proponent of gun control, has criticized Obama and Romney for not advocating tougher laws to prevent dangerous people from obtaining guns.

Bernard Zapor -- the Bureau of Alcohol, Tobacco, Firearms and Explosives special agent in the investigation -- said Monday that the 9mm semiautomatic handgun with multiple ammunition magazines used by the attacker had been legally purchased.

Page bought the gun on July 28 at the Shooters Shop in West Allis, Wisconsin, and picked it up two days later, according to a law enforcement official. The suspect bought ammunition there and used the shop's range at some point, said the official.

Sunday's attack occurred about 10:30 a.m., when temple members were reading scriptures and cooking food in preparation for the main Sunday service and community lunch. The temple has more than 350 members.

According to witnesses, the gunman started shooting in the parking lot, killing at least one person. He then entered the temple and continued firing, they said.

According to Oak Creek Police Chief John Edwards and the FBI, authorities have received tips that Page might have links to the white supremacist movement, but nothing had been confirmed. "I don't want to use that term (white supremacist) until we want to put it out there for sure," Edwards said Monday night. "That's not something I can take back."

Two neighbors of Page identified him in photos that showed him playing in the far-right punk band "End Apathy" with Nazi flags hanging nearby him. The nephew of the slain president of the Sikh temple said the attacker had a 9/11 tattoo on his arm.

According to a man who described himself as Page's old Army buddy, the attacker talked about "racial holy war" when they served together in the 1990s. Christopher Robillard of Oregon, who said he lost contact with Page more than a decade ago, added that when Page would rant, "it would be about mostly any non-white person."

Page, born on Veterans Day in 1971, joined the Army in 1992 and left the service in 1998, according to Army spokesman George Wright. His service was marked by "patterns of misconduct," though he received an honorable discharge, according to a Pentagon official.

The suspect did have a criminal record, Edwards said. A background check showed Page had separate convictions for DUI in Colorado in 1999 and for criminal mischief in Texas in 1994.

Page's family said it was "devastated by the horrific events," according to the Journal Sentinel.

"While there can be no words of comfort that will make sense of what happened that day, please be aware that our thoughts and prayers go out to all the victims and their families," the family said in a text message, according to the newspaper.

"We share in their grief for all who lost their lives that day and for those survivors, we hope for a speedy recovery. We have been cooperating and will continue to cooperate with the investigation in any way we can. Please respect our privacy as we try to deal with the tragic loss of life and family."

The gunman's former stepmother spoke of a very different Wade Page she once knew before losing touch with him over a decade ago, when she and Page's father divorced.

"I would not have known this was Wade," Laurie Page told CNN affiliate KUSA in Denver, Colorado. "He had Hispanic friends, and he had black friends."

"What has changed him I have no idea, and obviously we're never going to know," she said, moved to tears.

Two other Sikh victims remained hospitalized in critical condition, while a third was treated and released, Edwards said.

The wounded police officer, identified as 51-year-old Lt. Brian Murphy, also was in critical condition after suffering nine gunshot wounds, the police chief said, and had a "promising," but long, recovery ahead.

A Sikh human rights group said it would give Murphy a $10,000 reward.

One of the dead, Prakash Singh, was a priest who recently immigrated to the United States with his wife and two young children, said Justice Singh Khalsa, a temple member since the 1990s.

Relatives of Kaleka, the president of the temple in Oak Creek, Wisconsin, said that he was killed fighting the attacker.

"From what we understand, he basically fought to the very end and suffered gunshot wounds while trying to take down the gunman," said Kanwardeep Singh Kaleka, his nephew.

Meanwhile in India, the birthplace of Sikhism, Prime Minister Manmohan Singh said he was "shocked and saddened" by the shooting.

"That this senseless act of violence should be targeted at a place of religious worship is particularly painful," Singh, himself a Sikh, said.

The United States is home to about 700,000 Sikhs, nearly all of Indian origin, according to the Sikh American Legal Defense and Education Fund. The men are often easily identifiable by their beards and turbans, a tradition that's lasted for 500 years.