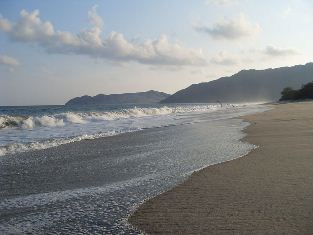 (CNN) -- A study has found elevated levels of caffeine in the Pacific waters off the Oregon coast, but it doesn't appear that the region's many cafes and coffeehouses are to blame.

Researchers from Portland State University and Washington State University, Vancouver, looked at caffeine pollution off the coast as part of a broader study of contaminants in the water. Their findings are published in the July 2012 Marine Pollution Bulletin.

After taking samples from 21 spots along the coast, researchers expected to find the most caffeine pollution in areas near wastewater treatment plants, large population centers or rivers and streams emptying into the ocean, said Elise Granek, assistant professor of Environmental Science and Management at Portland State. She conducted the study with her former graduate student, Zoe Rodriguez del Rey, and Steve Sylvester of Washington State.

Instead, they found high caffeine levels near Carl Washburne State Park and Cape Lookout -- two areas not near the potential pollution sources -- and low levels of caffeine near large population centers such as Astoria/Warrenton and Coos Bay.

They also found high levels of caffeine after a late-season storm that triggered sewer overflows.

"It signals to us that the source (of the caffeine) really isn't the high population centers, possibly because they are on wastewater treatment plants," Granek told CNN.

The findings indicate that wastewater treatment plants are effective at removing caffeine from the water, but that high rainfall and combined sewer overflows flush the caffeine out to sea.

The findings also suggest that septic tanks, which are used at state parks, might not be effective enough at containing pollutants like caffeine.

Though caffeine naturally exists in food, drink and pharmaceuticals, it is unusual for it to exist in the waters of the Pacific Northwest, Granek said.

"There's no known source of caffeine in temperate zones, so there's nothing we can suggest as a sort of alternative hypothesis at this point except for a human source," she said.

Caffeine is often used as a marker of wastewater contaminants, so that means there might be other pollutants in the water that also have a human source, Granek said. Other studies that are part of the same project are looking for flame retardants and pesticides, for example.

Even at the elevated levels found off the coast, the amount of caffeine is well below a lethal dose for marine life, Portland State said. Still, caffeine can cause some "cellular stress" to organisms, and another study this month will expose mussels to similar doses of caffeine to see its effects on their reproductive activity.

Portland State funded the study along with Oregon Sea Grant, a program of the National Oceanic and Atmospheric Administration.

Granek said they hope eventually to extend the caffeine study to Washington's coast. She said she also hopes to do a study of septic tanks in coastal areas to examine their role in water contamination.