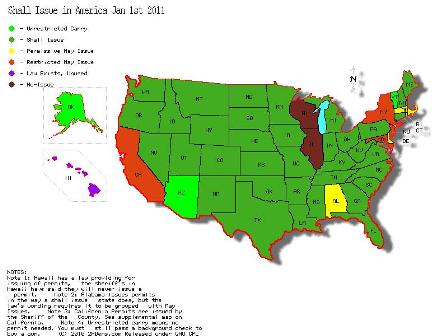 SPRINGFIELD, Ill. (AP) -- As state after state voted to let residents carry concealed guns, Illinois has held out, for a long list of reasons: A strong gun control movement. A dynasty of powerful Chicago mayors. A line-up of state leaders who oppose expanding access to guns.

With Wisconsin now on the verge of adopting concealed carry, Illinois soon will be all alone, the last state with a complete ban on carrying concealed weapons. That makes it the next big prize in the fierce national contest over gun control, with the National Rifle Association and its allies targeting the 50th state.

Despite the obstacles, gun-rights advocates believe time and political momentum are on their side. Pro-gun groups expect to make another push this fall or next spring. They're also pursuing at least two lawsuits. The outcome of the effort will determine whether firearms officially achieve new status in the United States -- something citizens of every state can own and carry, regardless of regional differences or which party is in power. In Illinois, the issue will also provide insight into the new leadership of the state's dominant city, which has firmly blocked legalization in the past.

"We never give up," said Andrew Arulanandam, public affairs director for the National Rifle Association. "We've been around 140 years as an organization. If we don't get something this time around, we're going to work until we get it."

Right now, Wisconsin is the only other state that doesn't give people a way to obtain permission to carry concealed guns. But lawmakers there have voted to end their ban, and Gov. Scott Walker said Monday that he would sign the change into law after July 4.

Gun control advocates want to hang on to Illinois and avoid nationwide defeat on concealed carry.

"Illinois is really important nationally," said Mark Walsh, director of the Illinois Campaign to Prevent Gun Violence. The country needs "one state people can look to and see it's still doing the right thing," he said.

Nobody can be confident about what will happen in Illinois without knowing why it has clung to a policy that every other state rejects. There's no single explanation, however.

Chicago is a big part of it. In much of the state, guns are commonplace, used for hunting and target-shooting. But in Chicago, guns are associated with crime. People worry that concealed guns will mean more shootings - in bars, on the El, at neighborhood festivals.

The city's leaders have a long record of supporting gun control measures. The U.S. Supreme Court recently struck down Chicago's complete ban on handgun ownership in the city.

"It's about as anti-gun a city as one could find," said Harry Wilson, a gun control expert at Virginia's Roanoke College.

But plenty of states have legalized concealed carry despite having large cities where gun crimes are a major concern: New York, Michigan, Pennsylvania and more.

Wilson suggested the difference could be that the major cities in those states don't have the same political muscle as Chicago - home to two legendary mayors named Daley, each of whom served more than 20 years. Both Daleys emphasized gun control. The city's new mayor, Rahm Emanuel, who took office in May, certainly won't abandon the issue, but might not consider concealed carry to be a top priority.

Richard Pearson, executive director of the Illinois State Rifle Association, agreed Chicago is what sets Illinois apart from other states.

"None of those places have something called the Chicago machine," Pearson said. "When you control the money for all the legislators for the state, then you have a huge amount of power over how people vote."

The state's most powerful politicians come from Chicago and collectively dominate the Illinois Legislature. The governor, Senate president, House speaker and attorney general are all Chicago Democrats.

Gov. Pat Quinn has promised to veto concealed carry legislation if it were to reach his desk.

"I don't agree with those advocates who feel that that is a measure for public safety. I think it's the opposite," Quinn said last week.

But Quinn's role might not matter if concealed carry were to win legislative approval, which would require a three-fifths vote under procedural rules. When the Illinois House voted on the issue last month, concealed carry had a 65-32 majority but still failed. It needed 71 votes to pass. But that means if it ever reaches the governor, it would have enough votes to overcome Quinn's veto.

The bill's sponsor, Rep. Brandon Phelps, a Democrat from Harrisburg, in rural southern Illinois, said support is inching upward because of the state's new legislative districts. With Chicago's population declining, many of the city's districts have been redrawn to stretch out into the suburbs. So some city-based politicians may wind up running partly in areas that are more sympathetic to legalizing concealed weapons.

"I see more Chicago legislators opening up to talk," said Phelps. And if every other state lets people carry concealed guns, it's no longer possible to argue the idea is radical and dangerous, gun rights advocates say.

Phelps hopes to hold another vote during the Legislature's brief fall session or when they resume normal business next year. But powerful Democratic House Speaker Michael Madigan may not let the contentious issue come up again soon.

The Brady Campaign to Prevent Gun Violence says it's ready to fight the legislation again. Brian Malte, the group's director of state legislation, said Illinois is "ground zero in the gun control debate" over concealed carry but also over strengthening background checks and banning assault weapons.

"It's really a tug of war," Malte said. "Next year will be a very interesting year in the Illinois Legislature."