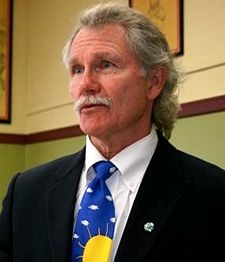 SALEM, Ore. (AP) -- Democrat candidate for governor John Kitzhaber pitched himself as a unifying force in Oregon politics who can bring together competing interests like public employees and the business lobby.
Kitzhaber told members of the Oregon Newspaper Publishers Association annual convention in Salem on Friday that he was a partisan ``superlegislator'' in his two terms as governor. But he said he has learned since he left office nearly eight years ago to put aside party differences.
``I think I'm far less partisan now than I was then,'' Kitzhaber said, noting his support for an open primary this year, something he said he would not have supported during his first run for office.
What was supposed to be a debate became a campaign stop for Kitzhaber when his opponent, Republican Chris Dudley, declined the association's invitation because of a family vacation.
The ONPA debate is traditionally considered the opening of campaign season in the Oregon governor's race.
Kitzhaber got in at least one swipe at his opponent during his question-and-answer session with the association's panel when asked what he would do differently as a candidate as compared to his previous run.
``Anyone asking to be governor has some obligations to candidly present proposals,'' Kitzhaber said. The candidate ``should welcome those proposals to be examined and challenged in public forums like this.''
With the state facing a recession and deep unemployment, Kitzhaber said public employees have been unfairly criticized for taking in an outsize share of pay and benefits while the state struggles with a projected $2.5 billion budget deficit in the next biennium.
``Public employees are not unwilling to make sacrifices, they already have,'' Kitzhaber said, noting that employee unions already agreed to cutbacks and furloughs. ``They're going to have to make more. But we have to stop this narrative of blaming public employees for the global recession.''
The January election that increased taxes on corporations and the wealthy pit business interests against public employees, Kitzhaber said, and the ``tragic'' result was ``both sides put out messages that are patently divisive and untrue.''
Kitzhaber also proposed changing several core elements of Oregon politics, including the state's reliance on personal income tax for revenue and Oregon's biennial system of budgeting. He didn't provide specifics, however.
He said he opposes a proposed casino in eastern Multnomah County. Kitzhaber said allowing that casino to open could start a trend of using gambling proceeds to fund state programs.
``I don't think Oregon would ever be the same if we went down that road,'' Kitzhaber said. ``I would take a very active role in the campaign in opposition to that.''
While Kitzhaber was able to keep his hands clean concerning his opponent, the Democratic Party of Oregon was quick to fire off missives to news organizations saying Dudley either can't address the issues or that he will ``attempt to run an issue-free campaign.''
Republicans were quick to fire back on Friday afternoon, blaming Kitzhaber's economic policies for a spike in unemployment.
``With Oregonians struggling to make ends meet, our state simply cannot afford another eight years of high unemployment, failing schools, and out of control spending,'' Dudley spokeswoman Brittany Bramell said.
Kitzhaber closed his speech by saying Oregon can be an example to other states recovering from economic crises.
``None of us can realign public expenditures and public revenues without really, really heavy lifting,'' Kitzhaber said. ``Somewhere in America, a state needs to demonstrate that it's possible to act as a community and get through this budget crisis more unified than when we went in. If we can't do it in Oregon, we can't do it anywhere.''