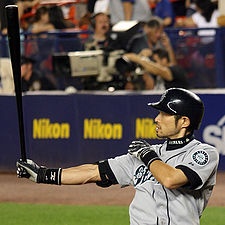 SEATTLE (AP) -- Ken Griffey Jr. is gone, having suddenly driven home to retirement in Florida. Cliff Lee is gone, too, traded to division-rival Texas instead of teaming with co-ace Felix Hernandez to beat the Rangers and everyone else in the American League West.
And Ichiro Suzuki is dumbfounded. Depressed, even.
His Seattle Mariners have gone from a trendy pick for the postseason and winners of baseball's offseason to losers during the real season. Again.
Seattle begins the second half on Thursday at the Los Angeles Angels 18 games under .500, and 15 games behind the Rangers. They are last in the division they expected to win. The team built on pitching and defense has failed so miserably on offense that nothing else has mattered much, or will matter much for final months of the season.
Seattle's 3.39 runs per game and .238 batting average are its second-lowest marks at the break in team history. The Mariners' 57 home runs in 88 games is their third-fewest at any All-Star break. Seattle's last playoff team of 2001 had 102 homers by now.
``To be honest with you, I can't even explain in words. It's very, very tough, hard and depressing,'' Suzuki told a group of about 10 reporters Monday in Anaheim, Calif., where Tuesday he played in his 10th consecutive All-Star game.
``The media -- everyone -- expected a lot from us in spring training, and it didn't work out that way,'' the 36-year-old franchise cornerstone said through his interpreter. ``You can't explain it in words. That's how tough it is, mentally.''
Suzuki, who this season became the sixth major league player since 1901 to steal 20 bases in each of his first 10 seasons, is not alone wallowing in the grim reality of 35-53.
``We're all disappointed,'' said manager Don Wakamatsu, who has gone from refreshing in the his rookie season to ripped by fans in his second. ``We came in with high expectations.''
General manager Jack Zduriencik has admitted those may have been too high.
One of the more telling -- and for Mariners fans, sobering -- things said over the first half of this lost season came in May. Zduriencik was candid while facing questions from an annual gathering of the Associated Press Sports Editors of the Northwest in Tacoma, Wash.
The second-year GM reminded that this franchise lost 101 games just two seasons ago, that the Mariners are still in the early stages of Zduriencik's complete overhaul of the organization. It started with the new way Seattle scouts and evaluates players using more statistical analysis and includes an increased emphasis on developing the minor league system to sustain success plus remodeling the big league team to one heavily based on pitching and defense instead of high-priced, free-agent power hitters.
``Maybe we are a little bit ahead of schedule,'' Zduriencik said of the heightened expectations. ``And maybe we are paying a price for being a little bit ahead of schedule. You still have to keep in mind (the) long range.''
That's what he did last week when he traded Lee for heralded hitting prospect Justin Smoak and some Double-A players.
``One of the important things for us is to win now, of course, but also build for the future,'' Zduriencik said Friday, reiterating what Mariners fans are tired of hearing -- they've been waiting nine seasons for that future to become the present.
``In this process we are trying to build a World Series championship-caliber club here.''
That seems light years away right now. So what's left in this season?
The 23-year-old Smoak is going to play almost every day at first base. That means Russell Branyan, acquired from Cleveland on June 26 to give Seattle at least one consistent home-run threat, will play more at designated hitter. That leaves Milton Bradley, his sore knee and his contract that still has another year and about $10 million left on it trying to find playing time in left field with young Michael Saunders. Wakamatsu said he hopes Bradley, who last started on July 3, will get a fresh start this weekend against the Angels following rest.
The rotation has a 3.55 ERA, the best at the All-Star break in team history. But without Lee it has holes that Triple-A callup David Pauley is now helping to fill. Erik Bedard, the former ace of the Baltimore Orioles, was scheduled to make his season debut this month following shoulder surgery last August. Then his shoulder began bothering him again. He remains out indefinitely.
The bullpen that was a strength last season is now a liability, epitomized by 2009 star closer David Aardsma's 0-6 record with a 5.40 ERA and four blown saves in 20 chances -- as many blown saves as he had all last season.
And the Mariners are closer to their second 100-loss season in three years than any postseason pipe dream.
``I didn't expect this to happen, but ... it's reality,'' Suzuki said. ``We have to deal with it.
``To us players, we can only look forward to a future.''