By Brian Stimson of The Skanner News
Published: 13 July 2010

So long as city council approves the contract on Wednesday, the Interstate Firehouse Cultural Center will be breathing new life by the first week in August. 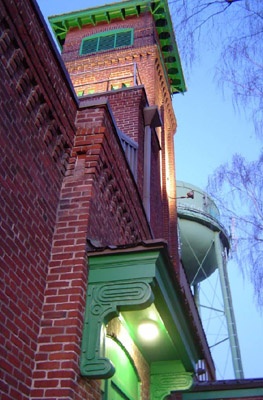 Ethos, the growing music and arts nonprofit lead by founder and director Charles Lewis, will be taking charge of the financially defunct theater and arts organization after winding down much of its operations in May. Although the organization was able to supplement much of its budget with money from the city, Lewis says Ethos will not be accepting government handouts this time around.
"We can be innovative and cutting edge when we're not tied up with government bureaucracy," he said. "We can have it as one of our programs."
Ethos has been a constantly expanding force in Northeast Portland. They've increased classes and offerings; built a café and recital space in a previously empty storefront next to their headquarters on Killingsworth Street and Williams Avenue; installed a living roof and an array of solar panels on their building; and recently purchased the arc-shaped church at Killingsworth and Rodney (which will continue to hold worship services and a daycare in addition to acting as a recital space and parking lot).
When Lewis heard the news of the IFCC's demise in the spring, he knew what Ethos had to do.
"We can't let that happen and we stepped up to the plate," he told The Skanner News. About five years ago, Ethos nearly merged with IFCC and the two organizations have shared board members and similar missions.
Where others have failed to keep the IFCC afloat, Lewis hopes his organization can succeed. The IFCC was a bit top-heavy, he says, with too many resources tied up in management, a task that will now fall under the auspices of Ethos' already established leadership team. Other tasks will also be shared – including the phone system, the auditor and other facility responsibilities.
"Now we just need to find program people for the building as opposed to the entire administrative structure," he said.
Lewis likes to think of it as an "economy of scale" -- the IFCC was just too small an organization to operate sustainably in the long run.
"The hope is to tap into the existing people who've used the IFCC and in addition bringing in the Ethos community," he said. "Many of our patrons and families have been the same because we've been such close neighbors."
One thing Lewis wants to make certain – the takeover will not mean massive change for the 28-year-old IFCC.
"We don't want to come in and assume we can do everything better," he said. "We want to respect and honor the history and the things that have happened there. We're coming into it very humble and realizing that we want to continue the great programming IFCC has done."
Ethos will be delegating the activities that don't involve music or musical theatre. A request for proposals will be submitted soon to attract two resident theater companies to operate at the firehouse. Lewis also wants to partner with a number of other arts organizations such as Camp Creative, ABCPDX, and Old Library Studio.
Lewis has other hopes for the firehouse building, as well. Currently, Ethos goes into the schools and holds assemblies – taking hours to build and tear down instruments and stages. Lewis wants to instead bring in students from the schools to the IFCC
"If we have a set space where kids can come to us from light rail or bus, we can put on an outstanding performance for the kids using theatrical treatments and lighting and great sound. In addition, we also optimize musicians, artists and actors times."
Lewis foresees culturally and historically targeted events utilizing the entire building – bring the kids into the building for an African American history performance, bring them upstairs to the dance studio for dance lessons and continue into the art gallery for culturally specific art.
"When we're programming with our partners, we have to think holistically," he said.
While Ethos is intrinsically linked to getting children involved in music, Lewis stresses that programming at IFCC will be for both adults and children, as well as classes for intergenerational involvement.
He expects Ethos to use the building for the first time early August with an already full summer camp for choir and musical theater.
"Some things are going to take longer to get going," he said.
With the loss of government assistance, Lewis stresses the need for community involvement. He will also be recruiting for four community panels to pick artists and companies for theater, visual arts, dance and music.
"It's really empowering the community and making sure what the community wants represented in the building is represented," he said.
For more information, visit www.ethos.org.