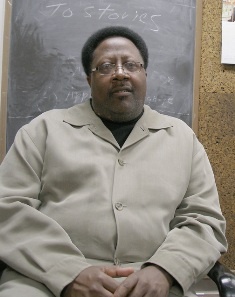 For the vast majority of his life, Emmett Wheatfall lived blissfully ignorant of what has now become his life's work.

Wheatfall had always been involved in performance of one kind or another. In high school it was theater. After he became a Christian, his focus shifted, but he always performed Martin Luther King Jr.'s "I Have a Dream Speech," matching tone and inflection.
But about two years ago, a request from a friend changed everything.
"A good friend of mine wrote a poem for her husband's 60th birthday and she asked me to take my voice and would I read it at his birthday," he said.
He decided to tweak it a bit, and he teamed up with local musician Janice Scroggins to put the poem to music.
"I distinctly remember being in the studio and she had me start with the poem and with her genius, she just started playing, and I'm doing what I do and she's doing what she's doing and I look over and the sound technician is bobbing his head," he said. "We got something here, he's vibing off the words."
The birthday boy loved the performance and Wheatfall had discovered a newly found passion.
He discovered poetry.
"I started to sit down and let me begin to write and I wanted to study the craft, I didn't want to insult the craft," he said.
This spring, Wheatfall released his first compilation of poems, "When I Was Young," with many set to music performed by saxophonist Noah Peterson, pianist Gordon Lee, bassist Andre St. James and Edwin Coleman III on drums.
A religious man, Wheatfall says he compiled a collection of poems that spoke to real life experiences through a moral lens.
"They're not cloaked in religiosity, these are secular songs, but they have that moral theme … that quest for fidelity, for hope, for love, for heaven," he says.
When looking for inspiration, it's the little things in life that inspire a new poem – the leaf falling from the tree, the glimpse of pretty Black woman, a memory from adolescence. He describes the experience of poetic creation as carving a piece of wood, a process that can take from one hour to 12.
"You can start out with one thing in mind and get into writing it and make a complete left turn and it evolves, it is a mystery, it is marvelously wonderful," he said. "It's like turning a combination on a lock, you turn it click, click, click, click … click."

'He's Vibing Off It'
After Wheatfall had been writing a poetry for a while, he wanted to put it to music, so he approached producer and musician Noah Peterson on a cold call.
"About three weeks later, he came back and said, just looking at it on paper, the words, I got some ideas," he said. "He put together the great Gordon Lee who plays with Mel Brown, Andre St. James, the legendary upright bassist, Edwin Coleman on drums, and he on saxophone."
"They put their musical genius with that CD," Wheatfall said.
Wheatfall, who still humbly considers himself an "aspiring" poet, says he constantly gets affirmation about his work.
"I've been in a barbership when I had the mix and they put it into the CD player and I was watching the guy sitting in his chair, all the noise and commotion going on, and he was (bobbing his head) and I saw him, and he was vibing off it," he said. "If people would take time say I'm going to really listen, what's being said, they're going to say, 'Oh man!'"
Wheatfall's dedication lead him to seek an experienced mentor. His modesty mandates he not overstep the bounds of his abilities by calling himself a full-fledged poet.
"In referring to myself, I use the silly little moniker 'The Apprentice Poet,'" he said. "In talking with my mentor, I said, 'I want to be honest about where I'm at in poetry.' There are literally hundreds of thousands of people who call themselves poets, many who've never done the work. I aspire to be a great poet who knows the conventions and academic rudiments of poetry."
One day, Wheatfall hopes to call himself a poet and be among – not better than – but among, the greats of poetry.
"People will call me a poet and that's OK, but understand I'm still growing, I'm still learning," he said.
Read more of Wheatfall's poetry on his website www.emmettwheatfall.com.