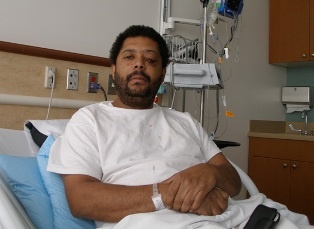 When Ray Batista agreed to serve out a 20 day sentence instead of paying a hefty fine on a hunting-related firearms violation, he didn't realize what was in store.

The incident has revealed that the state does not keep data on inmate safety.

A Slow Recovery
Blood still oozing from his closed, swollen left eye lid, a week after the assault that he describes as the worst pain in his life, Batista says the loss of vision still hasn't hit him.
"I'm surprised I'm coping with it as well as I am," he says.
It's difficult to focus with his one good eye, he says, his peripheral vision is shot and his depth perception makes it hard to perform various tasks. The ultra-potent pain killers are barely effective.
"I won't be able to drive for a while," he said.
And swinging a hammer, using a saw or walking on beams for his employment?
"I won't be able to do that at all," he said. "I'm the one who supports the family. My wife works, but the money she makes …"
Batista says he has retained a lawyer for a possible lawsuit.
Ron Weber, a former Department of Corrections employee and volunteer Beaverton police officer, says he is interested in getting a full-blown civil rights inquiry into the assault. He says he will be contacting Jesse Jackson's Rainbow/PUSH Coalition and the Rev. Al Sharpton's National Action Network.
Dickerson said they have identified several suspects and are taking their time with the investigation. He said they are awaiting a statement from Batista.
"I find this to be a barbaric act and I'm incensed that that would happen in our jail, that someone would do that to a human being for any reason," he said.
You can donate to his medical cost fund at any US Bank under the name Raymond Batista.