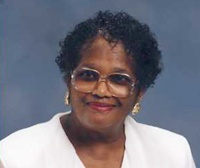 She was born March 7, 1926 in Warren, Ark., to William M. Powe and Rosa M. Winslow Powe. Both of her parents and a sister, Helen .M. Powe, all preceded her in death.

In 1943 she returned to Arkansas and graduated from Bradley County High School in 1944. Upon her return to Portland, she met Eddie Collins Sr. as she got off the train. They were married in 1945.

To this union two children were born — Eddie R. Collins Jr. and Helen Elaine Collins Gultry. Isabel was a loving wife and mother.

Isabel had a special gift of caring for people. She worked in nursing services and the medical industry for 42 years and in several local hospitals. She retired in the spring of 1994 from Emanuel Hospital after 25 years.

She was a charter member of the Portland Chapter of the National Council for Negro Women and had past memberships in many other social organizations, notably, the Order of Elks, the Oregon and Washington Football Club and the Hi Hatters Social Club.

She was a member of Mt. Olivet Baptist Church and was devoted to her children and family.

Lola Merriweather Passes Away at 87

Lola B. Merriweather was born to Sam and Pearl Waites on Sept. 13, 1919, in Bastrop, Texas. She went on to finish college in Austin, Texas.

Lola met and married Roy Merriweather in Corpus Christi, Texas, in 1941. They moved to Portland in 1944. Roy and Lola were active and belonged to many organizations and social clubs.

Lola worked at Montgomery Ward for several years and made lasting friends. She was a faithful member of Vancouver Avenue First Baptist Church and served on the Usher Board and on various committees throughout her worship there. Lola attended church until she became sick and could not attend.

Roy preceded Lola in death in 1974. Also preceding her was her sister, Margret Winston.

Services were May 1 at Vancouver Avenue First Baptist Church, followed by interment at Willamette National Cemetery.