Salem Family Keeps Bench Where Their Son Was Shot 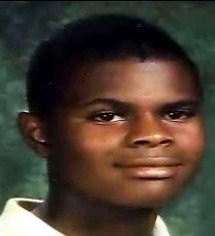 Update: Salem Police said this afternoon that accused killer 18-year old Lorenzo Garcia-Ceja and his brother, 29-year old Manuel Salvador Garcia-Ceja have been caught in Zamora, Mexico, and are being turned over to Mexican authorities for extradition to Oregon. See "Latest News"

SALEM, Ore. (AP) -- The bench where Montez Bailey was fatally shot one year ago now sits in the yard of his parents' home in northeast Salem.
``I'm happy I have it,'' his mother, Kathy Bailey, said. ``My husband just can't look at it.''
The bench is scrawled with messages about the Baileys' son, Montez LaMear Bailey, who was shot in Northgate Park a year ago.
For Kathy and Gilbert Bailey, it is a reminder of their heartbreak.
``I lost my baby,'' Gilbert Bailey said. ``I can't even describe the feeling, how much hurt it is. They took my pride and joy away from me.''
In the past year, the Bailey family, which includes three biological children, five adopted children and several foster children, has bonded to get through their grief.
``We've been surviving, we've been making it,'' Kathy Bailey said. But life has changed.
The Baileys used to tell their foster children that Salem is safe and if they mind their own business, they'll be left alone.
``We live in Salem, you know, it's a safe place,'' Kathy said. ``I don't want to say that because in my heart it feels like it is not true anymore. Mind your business and no one will bother you. That was my thinking.''
Police identified Lorenzo Garcia Ceja, 18, as the suspect. Garcia is a gang affiliate, police say, and he was on parole from the Oregon Youth Authority.
Montez and his friends Cameron Carolino, 21, and Skylar Hyland, 22, were walking a dog in Northgate Park on May 26, 2009, and had sat on a bench when they were confronted by a suspect with a gun.
All three men were shot. The gunman took off.
Police suspect Garcia fled to Mexico.
Montez was wounded in the head and died early the next day at a Portland hospital. The bench was given to the Baileys to protect it from graffiti and further damage.
The Baileys plead for someone to come forward with information about the suspect.
``I would love to see justice,'' Kathy said. ``I heard people say it is a tragedy because both families lost, but I can't see his family losing anything.''
A warrant has been issued. The FBI is offering a $5,000 reward for information that leads to Garcia's arrest.
Police said Garcia's family members live in Salem and may know their son's whereabouts. They haven't been cooperative with the investigation, said Lt. Steve Birr.
``There are a lot of people that travel back and forth that I have no doubt know exactly where these brothers are but refuse to cooperate,'' Birr said. ``By abstention they condone what they've done.''
Garcia's brother, Manuel Salvador Garcia Ceja, 29, also is wanted, on a charge of attempted murder, the stabbing of his girlfriend several times July 20, 2006.
Police think he also may be in Mexico. A warrant is outstanding and a $5,000 reward is available.
``We feel very sorry for the Bailey family,'' Birr said. ``They lost a son and yet we have a suspect who still has the ability to enjoy breathing free air.''
Earlier this month, a community Forgiveness and Peace Garden was dedicated at Northgate Park.
``I think this past year has been a year of tremendous growth for the neighborhood in dealing with the shootings and coming to terms with that and trying, I repeat trying, to figure a way to make something positive to come of it,'' said Lee Ann Reed, the chairwoman of the Northgate Neighborhood Association. ``It has been an uphill battle of course. We are all still reeling from this horrendous event a year ago.''
At the Baileys' home there's an envelope tucked away that contains unopened letters from people who received one of Montez's organs after his death. He was a registered organ donor.
Kathy Bailey has never opened the letters.
``I feel good that somebody's been helped,'' she said. ``But for me it's rough because I know the loss that I had to suffer for them to be helped, that we all had to suffer.''