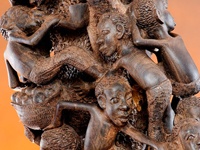 Beginning this month, the World Forestry Center will host a rare collection of Makonde ebony sculptures.

The exhibit will run from May 6 through Sept. 17 in the second-floor gallery of the Discovery Museum, 4033 S.W. Canyon Road.

One of five major tribes in Tanzania, the Makonde originally migrated north from Mozambique to the southern Tanzanian highlands. They are known as master carvers throughout East Africa and have been carving ebony for centuries for their own enjoyment and use. Today, the carvings maintain the traditional elements of the human story in a tribal setting, along with carvings that have been influenced by Western culture and a modern response to urban life.

Ebony is the one of the hardest and most valuable woods in the world. Although ebony is mostly used on piano keys, its versatility goes far beyond that. Besides being used by the Makonde to carve intricate sculptures, ebony is also used to make woodwind instruments, bagpipes, violin pegs, chessmen, buttons and handles for cutlery. Ebony trees are relatively small and are found in the seasonally dry forests of East Africa, and South and Southeast Asia.

The bark of ebony is tan and generally light in color, while the sapwood is a soft white. It is the inner portion of the tree that is fine-grained, dense, nearly black, strong and heavy and has been prized for centuries.