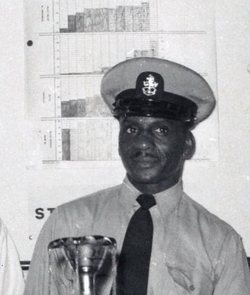 A Graveside Service with full military honors was held on May 7, 2010 at Willamette National Cemetery for Ernest E. Snells.
Senior Chief Petty Officer, Ernest Edward Snells was born on February 8, 1917 in Baltimore, Maryland to Arthur and Lillian Snells.
Ernest grew up in Baltimore, Maryland and later joined the United State Coast Guard. In 1942 he enlisted in the United States Navy and continued to serve until his retirement in 1977. During his military career, he served on nearly 20 navy ships and had fond memories of the USS Coral Sea.
Ernest was a longtime member of the Lyons club, a member of the fleet reserve and he was an avid coin collector.
In 1987, Ernest met Etta and they married were married on April 23, 2002.
He leaves to cherish his memory, his wife Etta, and his close friend Wayne Cannon.
Arrangements by: Terry Family Funeral Home - Please visit Ernest's online webpage at www.terryfamilyfuneralhome.com to send the family personal messages of condolence.