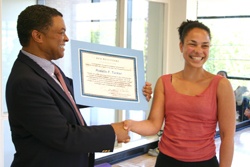 Rosalie Tucker dreams about doing many things. Now, she doesn't have to dream.

Tucker, 25, was selected as one of 38 students across the nation to receive a Jack Kent Cooke Foundation scholarship that will enable her to attend the University of California at Los Angeles.

The amount and duration of the scholarships varies by student based on the cost of attendance or grants received, but the awards can total up to $30,000 per year for each student. The same day she won the scholarship, the Portland Community College sociology major also learned she had been admitted to UCLA's World Arts and Cultures program where she'll ply her dance skills.

"It was amazing. A total surprise," Tucker said following the scholarship announcement. "I'm so honored. It's been quite a day."

Those who are designated Undergraduate Transfer Jack Kent Scholars are attending or have recently completed course work at two-year institutions. The awards will provide scholarships for these 38 students to transfer to four-year colleges and universities and complete their bachelors' degrees.

The undergraduate transfer scholarship recipients come from 17 states and eight foreign nations, including Belarus, Vietnam, Ecuador, Jamaica, Palestine, Bhutan, Romania and China. They were selected from among 676 nominees from approximately 438 community or two-year colleges nationwide.

The scholars were selected by the Cooke foundation with assistance from a national panel of experts. Selection criteria include academic excellence, financial need, will to succeed, leadership ability, service to others and interest in or appreciation for the arts.

Tucker, a Eugene native who resides in North Portland, may be young, but she's already experienced at connecting others through dance, passion and hard work. In her life, she has experienced multiculturalism as the daughter of a White mother and an African American father who moved to the West Coast and started a new life in a Buddhist community.

Early on, she knew she wanted to "seek out situations where cultures come together" and she put that into practice when she was 18 and joined Seattle's Diversity Dance Workshop. Four months in Thailand, Laos and Malaysia exploring both traditional and modern music and art helped her realize where she should be with her own dance and performance studies.

Two years later, she joined the arts community in Portland and paired her choreography with live music "ranging from big band to Klezmer, from samba to hip hop and from old-time jazz to spoken word." She created the Travesty Revue, a burlesque dance troupe, giving her "a voice that allowed me to comment on cultural perceptions and restrictions without being too serious or pedantic. By becoming clowns, we inhabited characters that made people laugh while asking them to think," she said.

At UCLA, she wants to learn more about cultural roots of performance, then eventually "move into a professional career as a choreographer, dance instructor, sociologist and educator."

And, Tucker credits PCC for helping her reach this dream.

"PCC has been an amazing school," Tucker said. "When I came here two years ago I received a ton of support. I didn't expect it. To experience the Cascade Campus and watch it grow and see how the neighborhood has grown, it's been exciting."