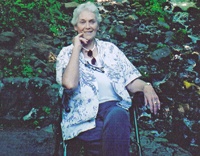 Mary Kavet Anderson, best known as a longtime activist for peace and justice, racial equality, women's rights, gay rights and a broader role for laity in the Catholic Church, died late last month. She was 80.

A memorial celebration will be held at 3 p.m. Sunday, May 7, at St. Andrew Catholic Church, 806 N.E. Alberta St.
Beginning in 1958, she was active in civil rights issues with several intercultural dialogue groups, prejudice reduction workshops and People of Faith Against Bigotry. She was co-founder and board member of Health Help Center, a free health clinic in North Portland, as well as co-founder and board member of the Center for Urban Education, FISH and East-CAP. She also was an associate member of the Sisters Of Holy Names.

Mary was born on Aug. 9, 1925, in Seattle. Growing up and learning to swim on Lake Stevens, Wash., Mary developed a lifetime passion for the water, which she shared with her brother and sister as well as others at the Salvation Army pool. She enjoyed nature photography and folk music, regularly attending the Puget Sound Guitar Workshop, where she tested her songwriting skills.

In 1947, Mary was a member of the first graduating class of nurses at Providence Hospital, and she used her wartime training for several years in a plantation hospitalin Kahuku, on the Hawaiian island of Oahu. She was married for over 30 years to Robert K. Anderson, D.M.D., who preceded her in death. Together, they raised six children in the Laurelhurst neighborhood.

She is survived by her longtime companions Margaret Kirschner and Sue Blanton; and children, Jim Anderson, of Lynnwood, Wash., MaryJo Anderson, of Nehalem, Ore., Barbara Anderson Malizia, of Forest Grove, Ore., Carol Anderson, of Orcas Island, Wash., and Kate Anderson, of Portland; nine grandchildren; and five great-grandchildren. She was preceded in death by her youngest daughter, Susan, in 1987.

Her struggle with the complications of diabetes and kidney failure was an opportunity for her to extend herself to new friends and relationships. Her family would like to thank the doctors, nurses and staff at Oregon Dialysis Center, members of her church communities and her many friends, each of whom had a special relationship with their mother. Her life culminated in the care of friends at Portland Peace House.

Remembrances may be made to Peace House or to Sisters of the Holy Names in Marylhurst, Ore.