The plea from Haiti reached Eugene surgeon Snell Fontus on Jan. 17, five days after the earthquake devastated the Caribbean nation. "Snell, I need help," Dr. Louis Phillip wrote in a text message. "Can you send a team?" There were good reasons for Phillip to contact Fontus, his friend and a general surgeon at Sacred Heart Medical Center at RiverBend in Springfield.

Fontus was born in Haiti, speaks French and had regularly visited the country before the quake. He had volunteered for several years at Phillip's hospital, Centre Medical Emmanuel in Cayes-Jacmel, bringing other American doctors and nurses with him. Fontus responded to Phillip's plea by leading a team of unpaid, volunteer Oregon doctors and nurses to Haiti. The Sacred Heart Medical Center Foundation paid travel expenses. The RiverBend hospital donated medical supplies. After his return, Fontus formed another group of volunteer medical workers from Eugene-Springfield who went to the hospital, about 30 miles south of the capital, Port-au-Prince. 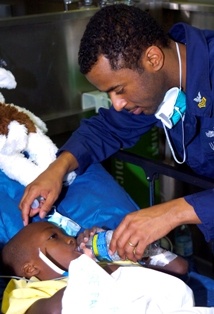 PHOTO: Electronics Technician 1st Class Dietrich Rey provides water to a Haitian child who is being treated aboard the Military Sealift Command hospital ship USNS Comfort (T-AH 20) after the 2010 earthquake. By Timothy Wilson

Fontus is regularly drawn to the impoverished country because of his heritage. But he's also inspired by his Christian faith and a sense of obligation to help others. "I've had a great opportunity to educate myself," he said. "And I have a profession that I can practice anywhere in the world. So when I go to Haiti and do the medical teams, that is a way to give back to my heritage because that is where I came from. But I think everybody should give back to their own community." Fontus does that in Eugene, too.

For seven years, Fontus helped run the local ACT-SO arts and academics competition for Eugene-Springfield African-American students. Today, he's one of seven members on the Eugene Civilian Review Board, which reviews the fairness of complaint investigations against Eugene police officers. "I felt like I needed to get involved in my community," Fontus said.

Much of the world was Fontus' community before he moved to Lane County 13 years ago. He grew up in four African countries and the United States. He was born in Haiti, one of three children of a Baptist minister father and a mother who became a teacher. But when Fontus was 1, his family moved from Haiti fearing government reprisal. His father, Fritz, a religious leader, was to give a speech. Haiti's President Francois "Papa Doc" Duvalier wanted Fontus' father to say in the speech that he was ordained by God to lead the country, Fontus said. Fontus' father gave the speech but refused to comply with Duvalier's order, and he left the country fearing for his safety. His family followed and they moved to Africa, first settling in the Central African Republic. There, Fontus' father worked for the United Bible Society, supplying missionaries with religious materials.

Fontus spent other parts of his childhood in Zaire, Kenya and the Ivory Coast. In between those moves, the family lived in Princeton, N.J., where both of his parents got degrees from Princeton University, and in Queens, N.Y., while his father was pastor of a Baptist church in Manhattan. Fontus first came to Oregon in 1981 to attend Judson Baptist College in The Dalles. A longtime friend described him as bright, but not inspired by the courses. "I remember the school was not challenging enough for Snell," said Stan Siewert, who lives in Caldwell, Idaho. "So he would generally wait for one or two days before the test, then borrow a book and do well on the test. I'm not surprised that he became a doctor."

After receiving a biology degree at the University of Minnesota, Fontus enrolled in medical school at Howard University in Washington, D.C. At first, he was unsure if he wanted to become a doctor. The uncertainty only lasted until he took an anatomy course.

"All of sudden chemistry came alive," Fontus said. "Microbiology came alive. All of a sudden it made sense. I thought, 'This is why there is that kind of reaction.' I had an incredible ability to read the dissecting book and retain in my memory what I read."

Fontus came to Oregon in 1997 to work as a surgeon at the former Cottage Grove Hospital. But the community-owned hospital went bankrupt and closed about a year later. PeaceHealth eventually took over the hospital. But during the transition, Fontus would drive from Eugene to see patients in Cottage Grove, said Nick Gideonse, a family practice doctor who worked in Cottage Grove. "That is the kind of medical professionalism that I would like to see more of in my colleagues," said Gideonse, now a doctor in Portland. Fontus became a U.S. citizen in 1998. About then, he started volunteering as a surgeon at the hospital in Cayes-Jacmel, a resort town on Haiti's southern coast. "When it comes to Third World hospitals, it's like a little jewel," Fontus said.

But conditions were different in January when Fontus and seven doctors and nurses from Eugene-Springfield and three from Portland arrived at the hospital, nearly two weeks after the earthquake. At the only fully functioning hospital south of Port-au-Prince, dozens of sick and injured people waited for medical care outside, refusing to go indoors fearing another quake. "That nice, peaceful place that I liked to go to had completely changed," Fontus said. ""It was chaotic and suffering, and misery was right under your nose."

Fontus' friend and colleague, Dr. Stephanie Jackson, immediately began organizing patient care outdoors. Blue tarps were erected over beds in the courtyards. Some people arrived at the hospital with broken bones set with homemade splints made of cardboard, wood or "whatever folks could find," Fontus said. Many of them had open, infected fractures. In a couple of days, the surgeons performed about 10 amputations.

A general surgeon, Fontus realized that the orthopedic surgeons would perform most operations, so he devoted much of his time to getting water and other supplies to keep the hospital running. "I would say other docs saved some lives," Fontus said. "I ended up being in a supportive role. That didn't diminish what I did because we all needed drinking water. I was the leader of the team. I got the team in and got them out, and I was able to take care of them."

Two years ago -- after living in Eugene for a decade -- Fontus said he got "an itch" and thought about moving, perhaps to work as a doctor in the U.S. Virgin Islands or the Bahamas. But Fontus concluded that to establish another medical practice would require him to start over again. He decided to stay put for another decade. Then, at age 54, he will reassess his future. For now he's happy to be a RiverBend surgeon, living in Eugene and leading volunteer doctors and nurses to Haiti. He plans to return to Cayes-Jacmel this fall with another group of volunteers. "To whom much is given, much is expected," he said.