Reprinted from the Experimental Airplane Association, Www.eaa.org
Published: 07 May 2010 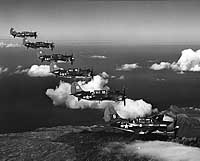 The March discovery in the Oregon woods of the wreckage of a World War II-era warplane has raised questions about whether this was the first time someone has seen the wreckage.
The origins of the Curtiss SB2C Helldiver, a U.S. Navy dive bomber, are a mystery. While initial media reports talked of this being a fresh discovery, a rather lengthy article in the Tillamook Headlight-Herald quotes extensively from longtime residents who have seen the wreckage before or have heard of a crash in that area.
A sidebar to the March 30 Headlight-Herald article referenced a story the newspaper published April 1, 1948, about a Navy pilot who died in a Helldiver crash in the woods where the wreckage was found.
"I saw that World War II plane wreckage some 30 years ago," said Carrol Spicer of Everett, Wash. "There was an air of sanctity and secrecy about it even then."
Meanwhile, a Helldiver first discovered by divers in January has been confirmed by the National Oceanic and Atmospheric Administration divers. The aircraft crashed in 1944 and the U.S. Navy is preparing a plaque to mark the site according to The Maui News.
The Oregon crash site isn't far from two naval air stations that were active during World War II.
Tillamook Air Museum curator Christian Gurling said the serial numbers indicate the plane was commissioned in 1945, the last year the model was in 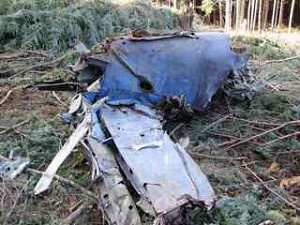 "Our number-one concern is that, if we have a couple of Navy boys out there, we treat them with respect and get them home," said Anderson.
A team of U.S. Navy personnel were called to investigate and share information with Joint Prisoner of War/Missing in Action Accounting Command in Honolulu and Navy Region Northwest.