By Brian Stimson of The Skanner News
Published: 03 May 2010 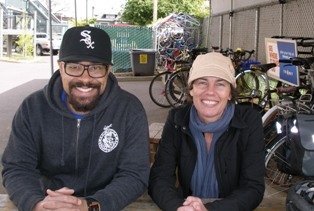 It would be an understatement to say bicycles get a lot of attention in this town. But the attention is mainly White attention, especially when it comes to hardcore bike commuters.

And the Community Cycling Center has set out to find out why.
Is it safety issues? Geography? Cost? Culture?
It's a little bit of each, says executive director Allison Graves (pictured at right). With the help from a Metro grant, the center reached out to 70 different individuals from a variety of community organizations. They arranged meetings with Somalis, Latinos and African Americans.
"The process is as important as what was learned," she told The Skanner News. "Because it was about building relationships with the community."
While the Community Cycling Center has focused on reaching out to underserved populations for years – such as the annual holiday bike drive and the create a commuter program – Graves said they are trying a slightly different approach to that old concept. By creating partnerships with other organizations, they want to be a "change organization and create a connected community." Their first partners in this endeavor are Hacienda CDC and the New Columbia housing project.
According to Mychal Tetteh (pictured at left), the center's bike shop manager, creating a broader community of cyclists has involved not making any generalizations about cultural barriers.
"For African Immigrants, even within Africa, issues that are preventing, say an Ethiopian woman from riding a bike, or feeling whether it's culturally appropriate for her to ride a bike, are going to be very different for an African American woman because of those pointed cultural differences," he said.
Many people see bikes as a symbol of poverty or gentrification. For others, helmets don't fit or look cool. And others simply never learned to ride.
Graves said she isn't out there trying to force anyone on a bike; many people of color are already riding. She also doesn't want to force the "bicycle lifestyle" on anyone, but wants to ensure people in different communities see this as a viable and empowering tool for transportation.
"Bicycles have become a lifestyle choice for a very small segment of the population and for other people, bikes are not desirable because they indicate poverty or any number of things," Graves said.
But bikes are more than just a cheap way to get around. They address some of the biggest community health challenges today: lack of physical activity and obesity.
The Community Cycling Center and the Northwest Health Foundation see the bike as one very powerful tool to address both these birds with one eco-friendly stone.
Chris Palmedo, of the health foundation, says a grant facilitated through the foundation from Kaiser Permanente to the Community Cycling Center targets the health disparities of many minority populations.
While bicycling often gets billed as a way to address the environmental concerns of automobiles.
"But it's really a health issue," he said.
The foundation was established in 2004 to help corporations and others allocate money to address what Palmedo says are the "social determinants of health."
"The reality is, if you gave everyone health insurance, it's not going to make you healthier," he said. "Are you exercising? Are there grocery stores nearby? Is it safe to walk outside? Poverty is much more determinant of health."
The money the cycling center gets from the Kaiser Permanente fund helps continue the community sessions funded by Metro. It is designed to create collaborative programs and to create localized leaders who can work with the center to more ideally advocate for the needs in that community.
"We use the bicycle as a tool," says Graves. "and the common ground is around transportation and health equity. Because if your problem with community connectivity is that there isn't the type of infrastructure prevents you from active transportation, that has to be addressed. The way it can extend the quality of food options they have access to, is a strong selling point."
As the center enters the busier summer cycling center, they're planning on doing ever more to expand cycling and its appeal. The "I Ride" campaign aims to take as many testimonials and photographs of the diverse population of riders. And the Bike Mobile will be traveling to different locations around Portland to fix people's rides and provide information on bike safety, traffic laws and other helpful tips for riding.
"One of the great things that the 'I Ride' has shown to the whole Portland metro area," Tetteh says. "It's shown the real diversity of the cyclists on the road. This is showing that the bicycle is a tool and it's a tool that everyday people are utilizing, these are people you know and you see on a regular basis and they're not just with Lycra and with a bike that's two stories tall. It's everybody out there getting it done."