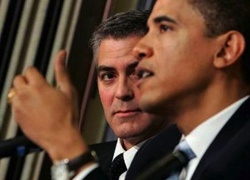 Actor George Clooney, left, looks on as U.S. Sen. Barack Obama, D-Ill., addresses the crowd April 27 at a Washington, D.C. rally about the ongoing genocide in the Darfur region of Sudan.

WASHINGTON--Thousands of people joined celebrities and lawmakers at a rally Sunday urging the Bush administration and Congress to help end genocide in Sudan's Darfur region.

"Not on our watch!" the crowd chanted as a parade of speakers lined up for their turn on a stage on the National Mall, the Capitol serving as a backdrop.


"The personal motivation for a lot of us is the Holocaust," said Boston-based Rabbi Or Rose of Jewish Seminarians for Justice. "Given our history and experience, we feel an obligation to stand up and speak out."


In an interview, refugee Hassan Cober said he was forced to leave his family and flee Sudan four years ago after many were killed and raped. He urged the United States and the United Nations to act quickly, saying he had no idea where his family was or if they were OK.


"We need deeds, not words," said Cober, now of Portland, Maine. "They need to come to Darfur today, not tomorrow, because what is going on is a disaster."


The organizers' permit anticipated 10,000 to 15,000 people would rally, one of several in U.S. cities this weekend against what the United Nations calls the world's worst humanitarian disaster.


"It is the socially responsible, good conscience thing to do," said Ron Fisher, who took a pre-dawn bus from Cleveland with his 15-year-old daughter Jordyn. "It's an opportunity to show my daughter what people do when they care about something."


The U.S. Park Police, which does not issue crowd estimates, reported no arrests.


"If we care, the world will care," Obama said. "If we act, then the world will follow." Pelosi said Democrats for once agree with Bush: "This genocide must stop."


Clooney and his father, Nick, a former television anchorman, interviewed families in Sudanese refugee camps. The elder Clooney described their role as reporters. "It's our job to tell you what we saw," he said. "Thousands of people hanging on by the most gossamer of threads."


His son, clad in a black T-shirt and khaki cargo pants, was the event's big draw. He said the United States' and United Nations' policies are failing -- and citizens must demand change.


"This is in fact the first genocide of the 21st century, but there is hope: all of you," the actor said. "Every one of you speaking with one voice, every one of you."


Jendayi Frazer, who leads the State Department's Africa bureau, said Bush hasn't shied from calling it genocide. He's working to prevent more deaths, she said, while the United States provides $1.3 billion in humanitarian assistance. "The strategy is working but you must continue to push for faster international action," she told the crowd.


Secretary of State Condoleezza Rice, in a broadcast interview, noted developments Sunday in Nigeria, where Sudan's government said it was ready to sign a peace agreement to end the bloodshed. Rebels, however, rejected the draft deal.


"Obviously a peace agreement would be a very important step forward in getting this done," Rice said on ABC's "This Week."


Later Sunday, Deputy Secretary of State Robert Zoellick issued a statement "urging the parties to finalize the agreement right away" and bring peace between Sudan and rebel groups.


Sudan has indicated it might accept a U.N. force in Darfur to aid African Union troops if a peace treaty is signed.


Years of fighting between ethnic groups and Arab militias in western Sudan have left at least 180,000 people dead and about 2 million homeless. Bush met with Darfur advocates at the White House on Friday and lent his support to the weekend rallies. "For those of you who are going out to march for justice, you represent the best of our country," Bush said.