Want Hud Funds? Then Show Me the Equity

By Helen Silvis of The Skanner News
Published: 27 April 2010 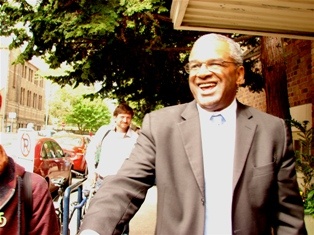 Next year's HUD budget  will include more than $8 billion for community development grants. Ron Sims, the agency's deputy director came to Portland, Oregon, last week to explain why the funds will go to projects that link urban and rural communities and help lift poor people and people of color out of poverty.

"If you receive our funds you're going to have to address equity issues," Sims told a breakfast meeting at METRO hosted by the Coalition for a Livable Future.  "There are winners and there are losers in this economy…In this most competitive economy we can't have people lose."

Sims spoke at a public meeting in the First Unitarian Church, delivering a passionate speech: Earth Day for All: The Challenge of Equity. "Are we going to say the poor will always be with us and we'll just leave them that way?" he challenged. "Or will the greatest country in the world allow children of color and poor people to have opportunities, fairness and justice?"

Small Maybe, But With Big Ideas!

St Peter, Minnesota; Cleveland, Ohio; and Mandragon, Spain have at least one thing in common in Sim's eyes.  Each of them is taking an innovative approach to sustainable development. Rural St Peter, for example, has an urban growth boundary, a bikeway and a thriving town center. The town recycles its human sewer waste by turning it into fertilizer for the surrounding farmlands. And it runs an agricultural co-operative that buys and sells produce from those local farms.

St. Peter has a strong environmental agenda, but it didn't stop there. Unlike the town's other residents, the Latino community lives in mobile homes. So, after consulting with Latino residents, the town is building affordable homes that will turn some of its poorest residents into homeowners. It's the kind of innovative project, HUD wants to see, Sims said. "Many areas don't recognize rural poverty, the color of rural poverty, or that they are aging rapidly and becoming medically isolated. "Sustainability cannot be an area of exclusion, it must be an area of inclusion." 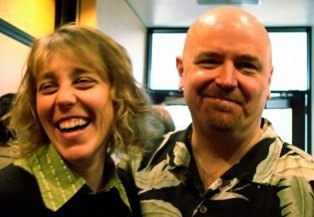 Jill Fuglister and Ron Carley, co-directors of the Coalition for a Livable Future

Sims was CEO of King County, Seattle, when President Obama appointed him second-in-command at the $53 billion federal Housing and Urban Development agency in Washington. And it was there that he first understood the connection between community development and poverty. King County's number crunchers took a close look at the data, and found disturbingly deep disparities. People's lives – and their deaths -- could be predicted by their zip codes. Sim's team found zipcodes could predict everything from graduation and unemployment rates to illness patterns, life expectancy and lifetime earning potential. The disparities were stark.

"Who loses?" he said. "It's people who are poor and most people of color. The high water mark for African Americans in King County was in 1970 when 48 percent of children lived in two-parent households and 40 percent had health care. Now it's 38 percent and 28 percent – and the figures are similar for Latinos."

The infant mortality rate for whites in Seattle was 4.5 per 1000 births, but for Native Americans it was 14.9 percent.

Figures like these prompted Sims to launch King County's equity and social justice initiative in 2008. Now he is pursuing the same goals on a national level at HUD, spearheading the administration's anti-poverty message, and the effort to prepare America for a future where cheap energy and transportation can't be taken for granted. The HUD community development funds will be available for projects that will create energy efficient, healthy, walkable, communities.  Sim's experience in Seattle taught him that it takes everyone working together to create truly sustainable community development.

"We thought we were great," he said of his team. "But we were only great for the people we saw and liked and who had our income levels. There were people in adjacent zip codes who had lives very different from our own. Sustainability can't ignore them. Sustainability must embrace them."

Grants Will Go to Projects That Promote Equity and Social Justice

When HUD scores applications for community development grants, administrators will be looking for innovative plans that meet local needs and promote equity as well energy efficiency. They will want to know how committed the community is to those goals, asking questions such as: Are schools and universities involved in the plan? Is the business community behind it? How will it affect jobs?

"We want sustainability to be an expression of a community's greatness," Sims said. "It's an issue of being smart – not just for ourselves, but for our children and our children's children."

Noting that Portland is known for its visionary thinking, Sims challenged the city's creative minds to come up with community development projects that will sustain everyone in the region over the long haul.

At the breakfast, Sims spoke alongside civil rights scholar john a. powell, (he doesn't capitalize his name) executive director of the Kirwan Institute for the Study of Race and Ethnicity at the University of Ohio. Powell told the group that in Portland, African Americans, pushed to the margins of the city by gentrification, face increasing isolation.

"The Black Community has lost 22 years of progress in housing," due to predatory lending and the foreclosure fiasco," powell said. "I'm not saying the white community has not been hurt, but the scale is different."