SALEM—After gaining a reputation for bogging down in partisan gridlock over the past four years, Oregon lawmakers surprised most observers with something quite the opposite: The state's shortest special session in history — a decisive, six-hour affair in which lawmakers approved more funding for schools, new restrictions on payday lenders and tougher penalties for sex crimes against children.

They also managed to spend $178 million in those six hours, giving $42 million in unanticipated lottery profits to schools and earmarking $136 million to close a budget gap in the state's human services programs.

It was a stark contrast from the Legislature that held five rancorous special sessions in 2002, followed by regular sessions in 2003 and 2005 that dragged well into the summer as lawmakers battled over school funding and other issues.

House and Senate leaders made it clear they viewed Thursday's special session as a chance to restore some credibility with the public by holding a short, productive meeting.

The session also was a testament to the power of an electionyear,with Democrats anxious to appear tough on crime, and Republicans willing to crack down on an industry that critics say has given a lot of consumers a rough ride. 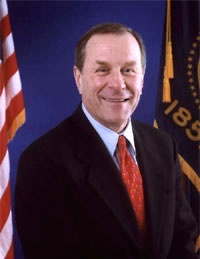 The human services budget gap was the main reason Gov. Ted Kulongoski called this week's session. The measure that won final passage Thursday calls for using reserve dollars, rather than cutting programs, to wipe out the deficit.
Though not always unanimously, the other bills that passed Thursday will:

• Increase minimum sentences from 100 months to 25 years for the crimes of first-degree rape, sodomy or sexual penetration when the victim is under the age of 12.

• Distribute $42.2 million in unexpected lottery proceeds to Oregon's 198 public school districts, an average of about $63 per student.

• Limit interest to 36 percent annually on the short-term, high-interest payday loans that have cropped up in check-cashing businesses.

A handful of lawmakers wanted to see the special session'sagenda broadened to include topics such as immigration reform, eliminating the state's corporate "kicker tax" and expanding bills to help veterans.

"Things worked the way they are supposed to work in special session, and I am grateful to each and every one of you," Courtney told the Senate just before adjournment. The Salem Democrat had admitted he was "sweating rocks" over the session's outcome.

Courtney also tipped his hat to Minnis, who kept House Republicans in line, even persuading more of them than had been expected to vote for the Portland taxing authority.

"Does this mean you're going to agree with me on everything next session?" Minnis joked in response.

Kulongoski, who said he plans to sign all five bills within the next week or so, acknowledged that the session had its election-year overtones. But delaying the session until after the state's May 16 primary, "would have given the Legislature more time to debate and fight, and I knew this thing would come apart."

Still, to some lawmakers, especially those outside the leadership circle, the session felt rushed. And others said that doling out the combined $178 million on the human services agency and schools leaves the state with little cushion for unanticipated emergencies.

"It was a little on the speedy side," said Sen. Jackie Winters, R-Salem. "I really do get concerned when we are passing legislation this quickly, and whether we are giving a thorough enough discussion to these issues."

Mark Thomson, a spokesman for a payday loan industry group, said the move to crack down on the industry could force some Oregonians to turn to unregulated alternatives, like Internet lenders.

"The extended loan term and restrictive rate cap mandated by (the bill) will make it unprofitable for payday loan companies to do business in the state," Thomson said.

Others praised the state's actions.Schools Superintendent Susan Castillo said the lottery funding and Portland taxing authority meant that, "after years of cuts, we have started back on the road to rebuilding our schools and to restoring the teachers and programs we have lost. I am very grateful to the leaders in this state for that change in direction."