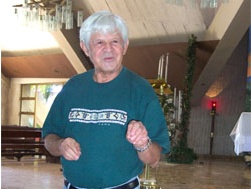 One of Central America's best-known activists, former priest and friend of the late Archbishop Romero, José "Chencho" Alas, will discuss the work that needs to be done in El Salvador during a presentation on Sunday, April 30.

The event is a benefit for Portland Central America Solidarity Committee and Foundation for Self-Sufficiency in Central America. Donations of $5 to $10 are requested.

"Chencho" Alas will speak about his efforts to help 86 small rural communities in El Salvador. Much of his time has been spent with the Foundation for Self-Sufficiency in Central Ame-rica, a group working to empower the people of Central America by creating sustainable livelihoods.

"Chencho" Alas began his priesthood in 1961 working with the poor in his native El Salvador. Since then, he has been a founder or member of numerous peace, social justice and environmental organizations. In the 1970s he narrowly escaped death at the hands of the El Salvadoran military and had to flee the country for 15 years during its civil war.

His work among the poor of Latin America has earned him several humanitarian awards, including the Peace Abbey's "Courage of Conscience" Award, which also went to Mother Teresa and the Dalai Lama. His involvement with the self-sufficiency foundation includes reconciling former combatants from El Salvador's 12-year civil war, helping them transform their community into what is now known as the "Zone of Peace"; reforestation projects to rebuild mangrove swamps destroyed in the war and establishing tens of thousands of public fruit trees; and helping deported United States gang members reform themselves through art school.

After 10 years of directing the foundation, "Chencho" is leaving to focus on his other organizations and projects. "Chencho" will introduce his replacement, Ike Trevino, who will discuss opportunities to participate in future foundation delegations to El Salvador.

"Chencho's" visit to Port-land is sponsored by the Portland Central American Solidarity Committee, which works with the people of Latin America, and by St. Andrew Church.

Music during the event will be performed by El Salvadoran musician Lolo Cutomay and Latin American poetry will be read by Colombian Andres Berger-Kiss. Food also will be served.